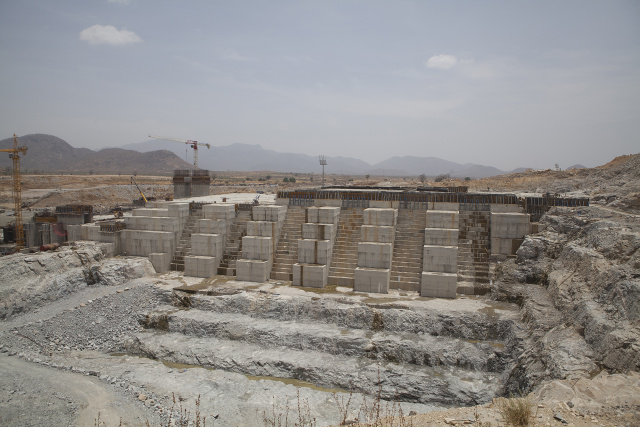 A photo taken on March 31, 2015 shows the Grand Renaissance Dam under construction near the Sudanese-Ethiopian border. Ethiopia began diverting the Blue Nile in May 2013 to build the 6,000 megawatt dam, which will be Africa's largest when completed in 2017. The leaders of Egypt and Ethiopia promised on March 24 to boost cooperation on the Nile river and turn a page on a long-running row over Addis Ababa's controversial dam project. Egypt, heavily reliant for millennia on the Nile for agriculture and drinking water, feared that the Grand Renaissance Dam would decrease its water supply. (AFP PHOTO / ZACHARIAS ABUBEKER)

(AFP) - Egypt, Ethiopia and Sudan on Wednesday set a January 15 target for resolving an intensifying feud over a massive dam being constructed on Africa's Nile River, which has raised fears of conflict over scarce water.

US President Donald Trump agreed to mediate among the three nations in Washington at the request of Egypt, which fears that the Ethiopian-built dam would disrupt the river that provides 90 percent of its drinking water.

After a day of talks mediated by Treasury Secretary Steven Mnuchin and World Bank President David Malpass, foreign ministers from the three countries said they would hold four technical meetings on the Grand Ethiopian Renaissance Dam.

The ministers "agreed to work toward completion of an agreement by January 15, 2020," a joint statement said.

"The foreign ministers reaffirmed the significance of the Nile to the development of the people of Egypt, Ethiopia and Sudan, the importance of transboundary cooperation, and their shared interest in concluding an agreement," it said.

Water ministers will take part in the technical meetings, although the statement did not spell out any potential solutions.

If the countries cannot reach an agreement by January 15, they said they would refer the issue to their heads of state or government or seek further outside mediation, under the terms of a 2015 declaration issued at a summit by their leaders.

Ethiopia says the $4 billion hydro-electric barrage would double its electricity and be indispensable for a growing economy.

"Just had a meeting with top representatives from Egypt, Ethiopia, and Sudan to help solve their long running dispute on the Grand Ethiopian Renaissance Dam, one of the largest in the world," Trump tweeted.

"The meeting went well and discussions will continue during the day!" he added.

A US official said in October that President Abdel Fattah al-Sisi had asked Trump to get involved in the dispute when they met in September on the sidelines of the UN General Assembly.

The Nile is a lifeline supplying both water and electricity to the 10 countries it traverses.

Its main tributaries, the White and Blue Niles, converge in Sudanese capital Khartoum before flowing north through Egypt to drain into the Mediterranean Sea.

Analysts fear the three Nile basin countries could be drawn into a conflict if the dispute is not resolved before the dam begins operating. It is scheduled to go online by 2022.

Discussions between the three countries broke down this year, prompting Egypt to call for international mediation.

Sisi on Monday described Trump as being of "unique standing with the power in dealing with conflicts... and finding crucial solutions for them."

Sudan has seen its relations warm with the United States as the country transitions to civilian government following mass protests against military rule.

Nagy tweeted that the United States will be "a steadfast partner of the people of Sudan in their pursuit of peace and security."

Sudan is asking the United States to lift its designation of the country as a state sponsor of terrorism, a legacy that it says severely discourages investment.

General » Be a reporter: Write and send your article » Subscribe for news alert
Tags: US, Egypt, Sudan, Ethiopia