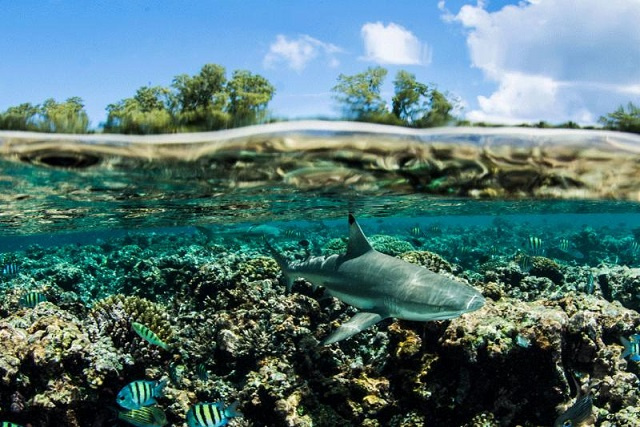 Blacktip reef shark gets its name from the pointed snout and black tips on its fins and is considered as one of the most beautiful sharks in the ocean. (Clare Daly, Save Our Seas Foundation)

(Seychelles News Agency) - The Seychelles’ remote St Joseph atoll is a vital habitat for newborns of the blacktip reef shark, a new study led by the Save Our Seas Foundation found.

The Foundation said that the study -- ‘Same species, different prerequisites: Investigating body condition and foraging success in young reef sharks between an atoll and an island system’ -- was published on September 17 in Scientific Reports.

She captured and measured 546 shark pups and assessed what and how much they had been eating. The differences among the shark pups between the two locations were surprising.

The study shows that blacktip reef sharks born at the atoll start foraging earlier and did not lose body condition compared to those from Moorea, French Polynesia.

“Generally, to successfully protect a species, we need to ensure that the resources -- prey species and habitat structures -- on which a species depends are also protected,” she said.

Blacktip reef shark gets its name from the pointed snout and black tips on its fins. It is considered one of the most beautiful sharks in the ocean and is seen often by divers since the species prefers shallow waters.

The author explained that coastal areas have long been considered refuges for young sharks where prey species are abundant to help support those crucial first weeks and months of life.

“However when we looked at the sharks’ stomach contents, we found that 47 percent of pups in Moorea had food in their stomachs. While it could be argued that young blacktip reef sharks might not need to feed that often, we noted considerable declines in the body condition of Moorea’s pups in the weeks that followed their birth. At St. Joseph atoll, this decline was not evident, which may be explained by the fact that 85 percent of the stomachs contained prey,” she added.

The study’s results emphasise why marine protected areas (MPAs) might be one suitable tool to consider for protecting whole ecosystems, safeguarding the shark pups and the resources they need to survive.

St Joseph is part of the D’Arros group of islands in the outer islands of the Seychelles archipelago of 115 islands in the Indian Ocean. The group became an officially protected nature reserve under the Nature Parks and Conservancy Act in July 2014.

A co-author of the study, Jodie Rummer from the ARC Centre of Excellence for Coral Reef Studies at James Cook University, said that the overarching and connected threat of the changing climate looms over all coastal environments.

“Rising global sea temperatures is one threat that blacktip reef shark populations in both Moorea and St. Joseph atoll face. Young reef sharks occurring in tropical areas are already living close to their thermal limits, so the expected rise of sea temperatures may pose an additional stressor for shark pups,” she said.

The founder of the Save our Seas Foundation, Abdulmohsen Abdulmalik Al-Sheik, said the Foundation is happy to see evidence that the healthy condition of the marine environment in Seychelles supports sharks and their survival in their most vulnerable phase of life.

“It emphasises once again to us at the Save our Seas Foundation just how important this region is for global shark conservation,” he added.

Founded in Geneva, Switzerland, in 2003, the Save Our Seas Foundation is a philanthropic organisation that aims to protect and care for the world’s oceans.