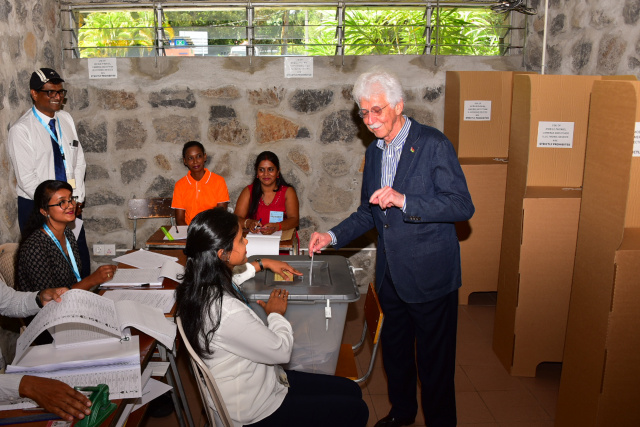 (AFP) - Counting was underway Friday in Mauritius following a strong turnout in an election to decide who will govern one of Africa's wealthiest and most stable democracies for the next five years.

Prime Minister Pravind Jugnauth is seeking a popular mandate in the Indian Ocean nation after being installed in the top job when his father stepped down in 2017.

Electoral Commissioner Irfan Rahman said roughly three-quarters of the island's almost one million eligible voters turned out to cast their ballot in a peaceful election.

Ballots were being counted at official centres across the country, with a result expected later Friday.

A very small number of Mauritians were unable to participate after failing to properly register, Désiré Basset, an election official, said Thursday.

The prime minister asked voters to judge him on his short time in office, pointing to his record on modernising public infrastructure and economic reforms in the prosperous archipelago.

For the first time in decades, three distinct political blocs vied for power in the legislative elections. New alliances could be likely if none can clinch an absolute majority.

Jugnauth heads the centre-right Morisian Alliance, two-time former premier Navin Ramgoolam leads the centre-left National Alliance and one of his former allies, Paul Berenger, is going it alone with his Mauritian Militant Movement.

Mauritius, comprised of four volcanic islands roughly 1,800 kilometres (1,100 miles) off the eastern coast of Africa, is predominantly Hindu but has sizeable Christian and Muslim minorities.

The country of 1.3 million people has evolved from a poor, agriculture-based economy, to a relatively wealthy financial services hub and tourist beacon.

But it has earned a reputation as a tax haven, and has come under fire for helping global companies park their wealth offshore, particularly those operating in Mauritius' poorer African neighbours.

Voters are choosing 62 MPs while the Electoral Commission appoints eight others from those not elected but who attained the highest scores. This system rebalances the distribution of seats between parties and communities.