400 homes in Seychelles to soon benefit from solar energy installation 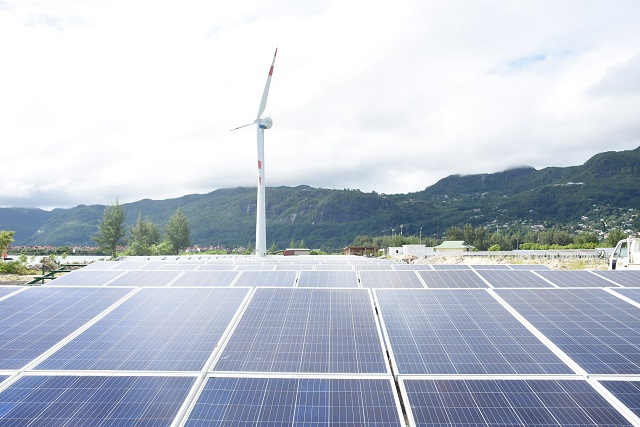 (Seychelles News Agency) - Around 400 low-income households in Seychelles will benefit from the energy produced by a new solar farm once it becomes fully operational on the man-made Ile de Romainville in January.

The households are those already being assisted by the Agency for Social Protection, which provides comprehensive social security services and social relief for the more vulnerable.

The five-megawatt photovoltaic system which covers half the perimetre of Ile de Romainville will be managed by the Public Utilities Corporation (PUC). The system will produce 7 million kilowatt hours of energy per year.

The chief executive of the Seychelles Energy Commission, Tony Imaduwa, said that the 400 households will be given a 300 kilowatt share of the energy produced.

This will be for free and “beyond that they will have to pay,” said Imaduwa.

He said the initiative will help many families who are trying to make ends meet and that “they can now save the money they were using to pay the electricity that they were consuming before.”

The project costs $10.2 million out of which $8.5 million is being financed by the International Renewable Energy Agency (IRENA) and Abu Dhabi Fund for Development (ADFD). The rest is financed by the Public Utilities Company.

Imaduwa said that with this new project, PUC will save around $1 million per year, as less fossil fuel will be used in the production of electricity.

“The plant will also help Seychelles reach its goals under the Paris Agreement of 2015 by reducing the emission of carbon dioxide,” Imaduwa said.

Seychelles has an energy policy 2010-2030  in place as a guide towards reducing consumption of fossil fuels by 15 percent by 2030. When this new project comes into operation, it will cover four percent of the total energy demand set for 2020.

The chief executive of PUC, Philippe Morin, said that as the installation is completed he expects the cost of production of electricity to go down.

The project includes the installation of a battery which will play an important role by stabilising the system. The battery, which is the size of four containers, will have a storage capacity of 3.3-megawatt hour with a power capacity of five-megawatts.

The new solar PV project has been installed on the same man-made island hosting five of the eight wind turbines of the Port Victoria wind farm. The PV system has been specifically designed to maximise the use of available land, while allowing for the maintenance of the wind turbines and minimising any shading losses resulting from them.

Seychelles currently relies on fossil fuels to meet its electricity demand, with fossil fuels accounting for around 20 per cent of the country's imports. The island nation has set a target of five per cent renewable energy by 2020 and 15 per cent by 2030.

The solar project on Ile de Romainville is expected to will save around two million litres of fuel annually.