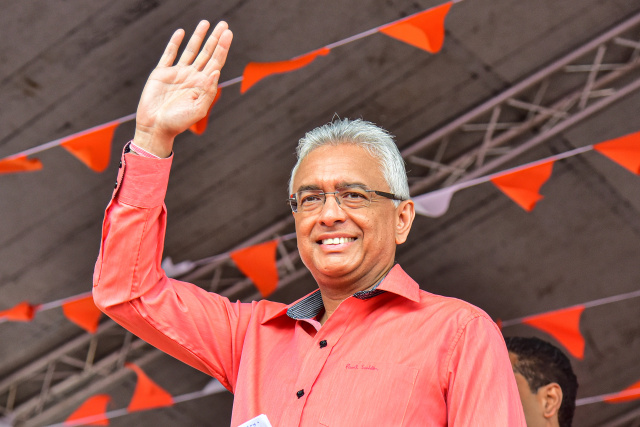 Mauritius's Prime Minister Pravind Jugnauth of Militant Socialist Movement (MSM) party reacts to supporters during their rally allied with the Liberation Movement (ML) party for the general election in Vacoas, Mauritius, on November 3, 2019. Mauritians will vote Thursday in an election that will see Prime Minister Pravind Jugnauth vie to win a popular mandate two years after he was handed the top job when his father stepped down. Nearly a million voters are registered for the parliamentary election in Mauritius, a stable democracy in the Indian Ocean, which gained independence from the United Kingdom in 1968.(Beekash ROOPUN / L’Express Maurice / AFP)

(AFP) - Prime Minister Pravind Jugnauth's coalition on Friday won elections in Mauritius by a comfortable margin, reinforcing the legitimacy of a leader who took over from his father in 2017 without going through a vote.

"I have received a clear mandate," for a five-year term, Jugnauth told supporters, adding that he would be prime minister for all Mauritians.

The 57-year-old leader was hand-picked for the top job when his father quit two years before his term expired, spurring the jeers of nepotism that dogged Jugnauth during his brief time in office in the prosperous Indian Ocean archipelago nation that prides itself as a stable democracy in a sometimes volatile neighbourhood.

His two opponents -- both former premiers themselves, spearheading separate political alliances -- hammered the point home on the campaign trail, urging voters to dump the Jugnauth clan.

But the prime minister urged Mauritians to judge him on his short time in office, talking up economic reforms and infrastructure programs as he pursued a popular mandate from the people.

The Electoral Commission said roughly three-quarters of the island's almost one million eligible voters turned out to cast their ballots on Thursday, a bit above the last poll in 2014.

Navin Ramgoolam, a two-time prime minister at the head of the centre-left National Alliance, conceded defeat, saying it was "unexpected".

One of Ramgoolam's former allies Paul Berenger, and his Mauritian Militant Movement, followed suit, saying the results should be respected "without bitterness".

The vote was overwhelmingly peaceful across Mauritius, a former British colony that has evolved from a poor, agriculture-based economy to a relatively wealthy financial services hub and tourist beacon.

The country of 1.3 million prides itself as a secure and thriving democracy free of the social and political upheaval roiling some of its African neighbours near and far.

Jugnauth had pointed to his stewardship of the economy, which grew at nearly four percent in 2018, social reforms and an infrastructure drive when opponents denounced "papa-piti" (from father to son) politics during the campaign.

Jugnauth has also introduced a minimum wage, about 215 euros ($240) a month, increased pensions for the elderly and reformed labour laws. The first stage of a new light rail network is also scheduled to open in December.

But the country of four volcanic islands, situated roughly 1,800 kilometres (1,100 miles) off the eastern coast of Africa, is not without its problems.

Youth unemployment, at 22 percent, is also high and income inequality is seen as deepening in the diverse country of 1.3 million.

It has also earned a reputation as a tax haven, and has come under fire for helping global companies park their wealth offshore, particularly those operating in Mauritius' poorer African neighbours.

Pope Francis, who visited in September, urged the country against seeking profit at all costs.

Mauritius is predominantly Hindu but has sizeable Christian and Muslim minorities.

While voters choose 62 MPs, the Electoral Commission appoints eight others from those not elected but who attained the highest scores. This system rebalances the distribution of seats between parties and communities.