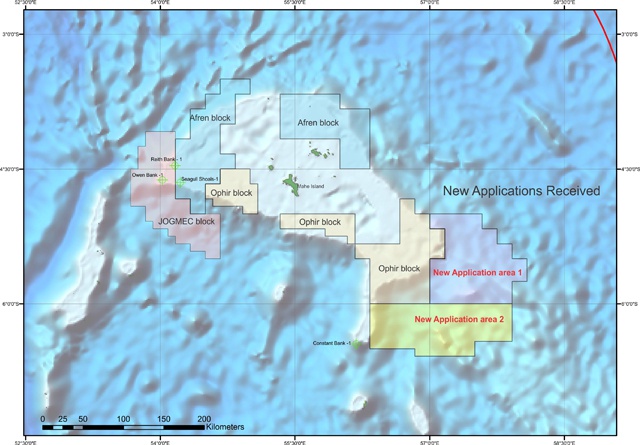 (Seychelles News Agency) - The Seychelles government has received applications for hydrocarbon exploration in two new areas situated a little more than 200 kilometres South of the main island of Mahé.

In a press statement issued this afternoon, the state-owned company responsible for regulating the hydrocarbon sector of the Indian Ocean archipelago, PetroSeychelles, said it is now inviting other interested companies to bid for two new areas for which it has received the new applications.

After conducting several assessments in the 1990s, Seychelles decided to freeze all exploration efforts in order to review domestic legislation pertaining to the energy sector.

It was in June last year that the island nation invited oil and gas exploration companies to bid for exploration blocks after the lapsing of a two-year moratorium.

According to the press statement, under the “Seychelles Licensing Initiative”, which was announced in June 2013, oil companies may submit applications for specific areas of the Seychelles Exclusive Economic Zone, not exceeding 10,000 square kilometres per application, for Petroleum Exploration.

The company is qualified once its financial and technical capabilities have been assessed and thereafter other companies are given 90 days to bid on the same area.

In the case of the two new areas for which it has received applications, PetroSeychelles is giving other interested companies until November 17 to submit their own proposals.

“All proposals will be opened at the end of the 90 day period and one company will be selected to negotiate a Petroleum Agreement with the Government for the Area.”

Since the beginning of this year oil exploration in the Seychelles waters has been attracting more interest with several foreign companies currently involved in collecting seismic data of the rock formations for processing.

FTSE-listed company Ophir Energy that signed a farm-in deal with Australian oil company WHL in March under which Ophir stands to earn a 75 percent stake in WHL's offshore Seychelles assets, has just completed some 1500 km² of 3D seismic surveying of an exploration block known as Junon, 115 kilometres southeast of the main Seychelles island of Mahé.

The state-owned company responsible for regulating the hydrocarbon sector of the Indian Ocean archipelago, PetroSeychelles, and Japan’s Oil Gas Minerals Exploration Company (JOGMEC) ordered a two-week geochemical survey in the waters south-west of the main Seychelles island of Mahé in May.

The Chief Executive of PetroSeychelles, Eddie Belle, also indicated recently that the country’s other exploration license holder, AFREN, could also be seeking to conduct an additional survey within the Seychelles’ EEZ before the end of the year.

As foreign companies continue prospecting for oil and gas in Seychelles waters', the archipelago has also recently been accepted as a candidate country by the Norway-based Extractive Industries Transparency Initiative (EITI) board.

EITI sets the global transparency standard for all minerals and Seychelles joins 45 other countries worldwide, that are required to extensively disclose revenues and measures to improve accountability in exploitation of oil, gas and minerals