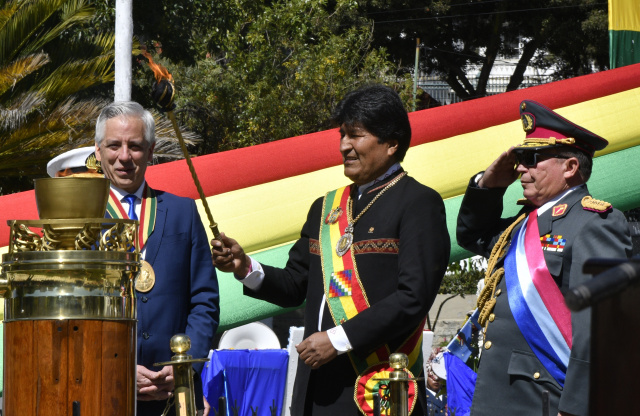 Bolivia's President Evo Morales (C) lights a votive flame next to Vice President Alvaro Garcia Linera (L) and the commander-in-chief of the armed forces, Williams Kaliman, during the commemoration of the 140th anniversary of the Battle of Calama -in which Chile took control of Antofagasta region, at that time part of Bolivia- in La Paz, on March 23, 2019. Bolivian President Evo Morales resigned on November 10, 2019, caving in following three weeks of sometimes-violent protests over his disputed re-election after the army and police withdrew their backing. With no sign of violent protests abating, the commander-in-chief of the armed forces, Williams Kaliman, asked Morales "to resign his presidential mandate to allow for pacification and the maintaining of stability, for the good of our Bolivia." (AIZAR RALDES / AFP)

(AFP) - Evo Morales was Latin America's longest-serving president until he resigned in ignominy Sunday, after weeks of opposition protests over an election ultimately said to have been riddled with irregularities.

A member of the Aymara people, he grew up in poverty on Bolivia's high plains and was a llama herder, coca farmer and leftist union leader before rising to take office as his country's first indigenous president in January 2006.

His victory in October 20 elections -- verified by the heavily-criticized Supreme Electoral Tribunal -- had been set to extend his mandate until 2025 and give him 19 consecutive years in power.

But election monitors from the Organization of American States who carried out an audit of the controversial polls said they had found many irregularities in their analysis of the election.

Morales called new elections, but resigned within hours of that announcement after army and police chiefs joined calls for him to quit.

Recently turned 60, Morales was one of the last of the wave of leftist leaders who swept to power in the region in the early 2000s.

Those leftist governments have since fallen away, torn down by a conservative backlash in Brazil, Argentina, Chile and Ecuador -- though Argentina's Peronist left bucked the trend to win last month's elections amid an economic crisis there.

Under Morales' leadership, Bolivia made landmark gains against hunger and poverty.

Sitting on the region's second-largest gas reserves, after Venezuela, and the world's largest reserves of lithium, Bolivia's economy has more than tripled in size during his 13 years in office.

However, long before the social unrest of recent weeks that heralded his resignation, opponents accused him of tolerating corruption and investing in flashy infrastructure projects at the expense of health and education.

A case in point is his decision last year to move the government headquarters into a luxurious skyscraper in La Paz.

While still among the poorest countries in Latin America, Bolivia's poverty rate has decreased from 45 percent of the population in 2010 to 35 percent in 2018, according to the World Bank.

It's all a long way from his childhood herding llamas and helping his parents in the fields in a small, arid village in western Bolivia's Oruro department.

"Until I was 14, I had no idea there was such a thing as underwear. I slept in my clothes... (which) my mother only removed for two reasons: to look for lice or to patch an elbow or a knee," he wrote in a candid autobiography.

Four of his six brothers and sisters died of malnutrition and disease before the age of two.

Morales never went to college and has considerable difficulty reading speeches in public, instead preferring to improvise by repeating phrases about the economic strides made under his government.

Before his narrow but ultimately tainted victory in last month's elections, Morales has been re-elected twice before with large majorities. His only defeat at the polls came in a 2016 referendum when he tried to amend Bolivia's constitution to run for a fourth time.

Refusing to accept defeat, his party petitioned the country's highest court, which analysts say is packed with his allies and which backed his right to run again.

The move led to protests and allegations of corruption from the opposition, whose candidate, former president Carlos Mesa, provided Morales with his stiffest electoral test yet.

Morales had urged the electorate to give him "five more years to complete our great projects" and continue to expand one of Latin America's fastest-growing economies.

Under Morales, Bolivia has increased foreign investment, particularly from China, to help it exploit its rich natural resources and is on track to become the world's fourth-largest producer of lithium by 2021.

A fierce critic of the United States, Morales was a staunch ally of leftist governments in Cuba and Venezuela.