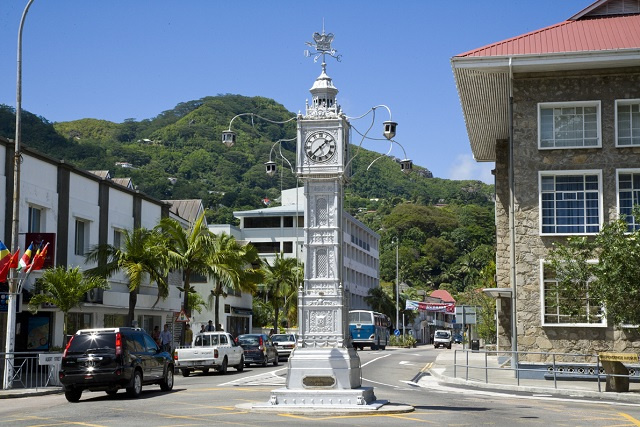 The clock tower is situated in the heart of Victoria and is considered one of the landmarks in the capital. (Gerard Larose, Seychelles Tourism Board)

(Seychelles News Agency) - The Seychelles' renowned clock tower is chiming once again following repair work done on the national monument to replace the inner mechanism, which blew up a few weeks back.

Two experts from the UK-based company Gillett and Johnston carried out the work on Friday and Saturday, after assessing the clock’s structure together with its internal gabbing. The firm, highly reputed for making this design of clock tower, was the same one contracted for the construction of the tower.

“The clock’s main circuit was blown but the fuses were intact which is very peculiar as in cases like these, the fuses are usually the cause of the problem,” said Gerry Coombes-Winyard, one of the engineers working on the clock.

Work carried out on the monument, which is managed by the local National Monuments Board, involved replacing the master clock. The work cost about $9,100.

“We are happy that the clock tower, one of the historical icons in town, is in working condition again. There had been a lot of complaints when the clock was not working,” Bertilda Walter, the principal heritage officer at the national heritage research and protection section in the department of culture told SNA on Monday.

She said that the department is “happy that the work was done in a fast manner. For the 250th anniversary of the first settlement, the clock tower will be working."

Walter urges motorists to be more careful when driving around the clock tower, to avoid hitting into the railings and the tower itself.

“We took the opportunity to attach the technician taking care of the tower to the two engineers so as to ensure that he is shown how to continuously maintain the clock tower. We also came upon an agreement that they will assist us by sending instructions via email on how to keep the clock running without any problem,” added Walter.

The local technician also had the chance to learn more about the upkeep of the clock and what to do if the situation repeats itself.

Made out of cast iron, the clock tower is situated in the heart of Victoria and is considered one of the landmarks in the capital. It is one of many national monuments in Seychelles, an archipelago in the western Indian Ocean.

The clock tower was inaugurated on April 1, 1903, by Ernest Bickham Sweet-Escott, who was the governor. At the time, Seychelles was still a British colony and after the passing of the late Queen Victoria in 1901, Sweet-Escott proposed that a building be erected as a memorial.

Out of $735 required to fund the construction of the memorial tower, a sum of $238 was raised by the public and the difference brought forward by the government.

General » Be a reporter: Write and send your article » Subscribe for news alert
Tags: Gillett and Johnston, National Monuments Board, Ernest Bickham Sweet-Escott

More than 50 monuments in Seychelles are protected under new act