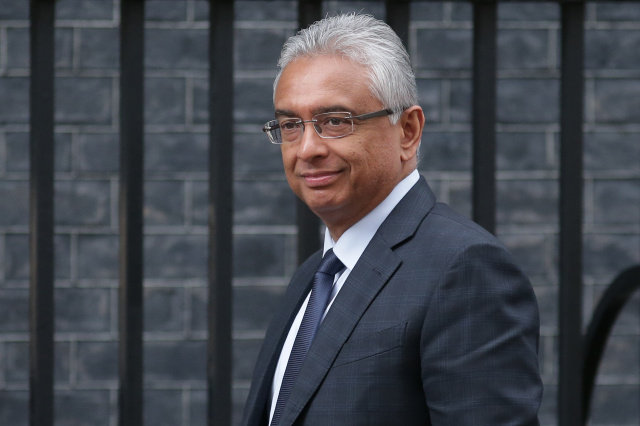 (FILES) In this file photo taken on March 18, 2019 Mauritius' Prime Minister Pravind Kumar Jugnauth arrives outside 10 Downing Street in London. Mauritius Prime Minister Pravind Jugnauth on November 8, 2019 claimed victory in legislative elections after his coalition headed to clear victory with 80 percent of the votes counted by electoral authorities. The 57-year-old leader was hand-picked for the top job when his father quit two years before his term expired in 2017 and Jugnauth had sought a popular mandate in the elections. (Daniel LEAL-OLIVAS / AFP)

(AFP) - Prime Minister Pravind Jugnauth's coalition has strengthened its grip on parliament after Mauritius' electoral commission finalised the outcome of the election in the Indian Ocean nation.

Mauritius is predominantly Hindu and is divided into ethnic groups under the 1968 independence constitution to also reflect the sizeable Muslim minority, the Chinese and the "general population", those of creole backgrounds or European origin.

While voters choose 62 MPs, the commission appoints eight others from those who attained the highest scores but were not elected directly.

Under this system, set up to rebalance the distribution of seats between parties and communities, the Morisian Alliance added four seats, the centre-left National Alliance three and the Mauritian Militant Movement one.

Jugnauth's victory has reinforced the legitimacy of a leader who took over from his father in 2017 without going through a vote.

The prime minister had urged the country, seen as a stable democracy in a sometimes volatile neighbourhood, to judge him on his short time in office, talking up economic reforms.

The commission said roughly three-quarters of the prosperous archipelago's one million eligible voters turned out to cast their ballots on Thursday, just above the numbers for the last poll in 2014.