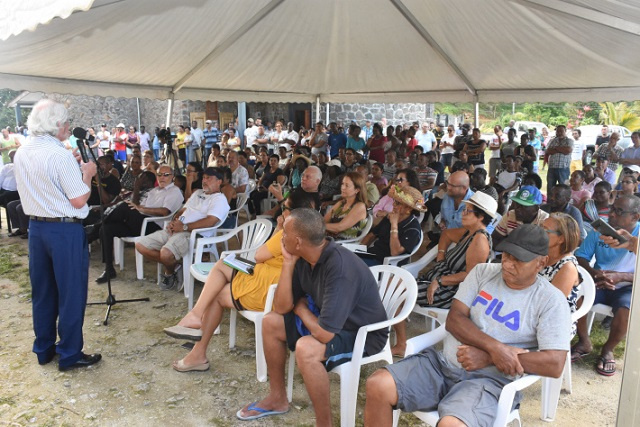 The residents of La Misere a meeting with Minister Loustau-Lalanne in October 2019. (Seychelles Nation)

(Seychelles News Agency) - Plaintiffs in two cases of contaminated water at La Misere filed before the Seychelles Supreme Court agreed on a settlement and withdrew their complaints, their lawyer said on Tuesday.

The five complainants who filed their cases eight years ago were demanding that the Associated Contracting and Consulting Limited (Ascon) acknowledge that pollution had occurred. They were also seeking monetary damages on an individual basis instead of by household, which was how the initial payment was done in 2013.

Around 1,400 inhabitants from La Misere and Petit Barbarons in the western parts of Mahe, the main island, including those working in La Misere, were affected by the water pollution during the construction of Sheikh Khalifa bin Zayed al-Nahyan’s palace complex in 2010. The incident occurred after an accident at the sewage plant caused diesel and raw effluent to seep into local water sources.

The five plaintiffs who filed their cases did not take the initial compensation package.

Speaking on behalf of his clients, lawyer Bernard Georges said that “in the last couple of months we have worked towards a settlement and today we are officially withdrawing the two cases.”

Georges told the court he wanted to put four matters on record to explain why the five plaintiffs have agreed to withdraw their cases.

The first plaintiff, Nicolas Prea, who is also the Speaker of the National Assembly, took the stand to confirm the four important matters that occurred between February 2017 and November 11, 2019.

He said that President Danny Faure in his State of the Nation Address on February 14, 2017 said that the government accepted full responsibility for the pollution and apologised to the residents.

Prea added that following an urgent motion tabled on September 25 by the elected member for the western district of Grand Anse Mahe, Waven William, the government showed its commitment through an announcement by the finance minister.

Maurice Loustau-Lalanne informed the National Assembly that an extra compensation payment announced by Faure in 2018 will now be done on an individual basis and this would be factored in the 2020 budget.

Loustau-Lalanne also informed the Assembly on Monday that negotiation on a new compensation package was underway with the United Arab Emirates’ representative in Seychelles and this will continue at the beginning of the year.

“On the basis of what President Faure and Loustau-Lalanne have said, I believe they have given us their commitments with regard to our request and there is goodwill on their part, so I am therefore prepared to withdraw my two plaints,” said Prea.

The Seychelles government has pledged to pay the $15 million to settle the second round of compensation claims. The payment will be done in phases with the first payment in January 2020 followed by the second one in 2021.

According to documents received from the Office of the Attorney General, and which has been approved by the aggrieved plaintiffs, individuals will receive either $1,100, $1,800 or $3,600.

Speaking to SNA, Georges said he was satisfied with the outcome.

“I am generally satisfied and I think it is a good settlement. It’s something that we worked long and hard for. Obviously some will be disappointed that they are only getting SCR50,000 ($3,658) after many years but you must consider that most people have already got at least another SCR50,000 in the previous SCR250,000 ($18,289) that was paid per household in 2013.”

Prea said that “by my withdrawal, I accept that the two requests made in our plaints have been met and I will take the proposed compensation announced by the government. My message to the residents is that we have to move forward with this and it’s time we bring closure to this process.”

The cases were being heard by Chief Justice Mathilda Twomey.