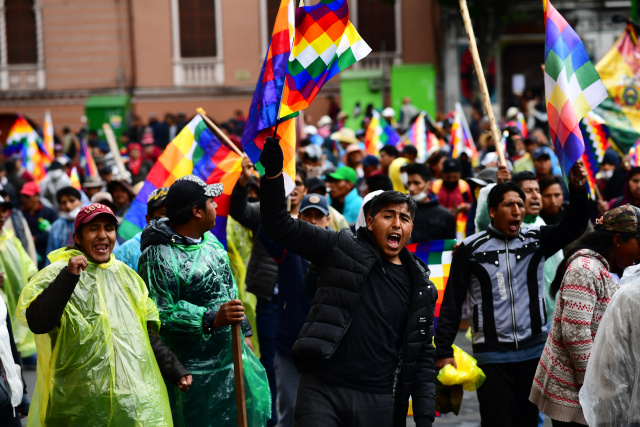 Supporters of Bolivian ex-President Evo Morales demonstrate in La Paz on November 14, 2019. Bolivia's exiled former president Evo Morales said Wednesday he was ready to return to "pacify" his country amid weeks of unrest that led to his resignation. (RONALDO SCHEMIDT / AFP)

(AFP) - Bolivia's interim president Jeanine Anez on Thursday ruled out exiled leader Evo Morales from standing in new elections as thousands of demonstrators marched through La Paz in support of the socialist icon and against the new, acting leader.

Columns of people streamed into the seat of government La Paz from the neighboring town of El Alto for the second day running to press their argument that Morales's departure was not a resignation but rather the product of a coup.

Waving multicolored "wiphala" indigenous flags, many of the demonstrators chanted: "The time is now, civil war" and "Come back Evo!"

The interim government announced on Thursday that talks with Morales's Movement for Socialism (MAS) party had begun in a bid to bring peace to the deeply polarized country.

Pledging early elections, Anez -- until now a little-known lawmaker -- proclaimed herself acting president on Tuesday after Morales fled the country for Mexico, claiming to fear for his safety amid deadly protests. Her move was validated by the country's top court.

Unrest erupted when Morales -- Bolivia's first indigenous president -- was accused of rigging the results of October 20 polls to gain re-election for a fourth term.

But Anez, 52, said Morales could not take part in any new elections -- Bolivia's constitution limits a president to two successive terms.

"Evo Morales is not allowed to stand for a fourth term. That's why we've had all this upheaval," said Anez, suggesting that MAS "find another candidate."

With tensions still high, the government said it had opened negotiations with MAS lawmakers, who previously boycotted the senate session in which Anez declared herself president.

"We have set up talks and we believe we can bring peace to the country," said Anez's cabinet chief Jerjes Justiniano.

The claim could not immediately be confirmed with the MAS party.

"We are calling for the resignation of this racist president, this putschist," said Juan Gutierrez, an Aymara.

Morales has kept up attacks on the new government via Twitter from his exile in Mexico.

Anez told reporters on Thursday that new Foreign Minister Karen Longari would "make representations" to Mexico to insist that Morales be held to the terms of his political asylum and prevented from interfering in Bolivia's politics.

Mexico rejected the accusation, insisting "a refugee's freedom of expression cannot be subject to greater limitations than any other Mexican civilian."

MAS on Thursday accused Anez of "continuing to incite violence" in the country, which has been in turmoil since Morales's contested re-election.

Nearly a month of protests have left 10 people dead and almost 400 wounded.

Normal business has resumed in the main cities, but schools and universities remained shut due to the continued threat of demonstrations. Many gas stations remained closed because of a lack of supplies.

Buoyed by growing international recognition, Anez was expected to complete her government line-up on Thursday, having named new military chiefs and half of her proposed 20-member cabinet the night before.

New defense minister Fernandez Lopez Julio said in a speech at the military college in La Paz that the incoming government would bring peace to the country.

"Above all, we will have to have faith in God," he said, highlighting the conservative Christian emphasis of Anez's government after she set the tone by brandishing a bible when assuming office on Tuesday.

The United States, Russia, Colombia and Guatemala all recognized Anez as the interim president, though Moscow said it considered Morales the victim of a coup.

"This is not about recognizing what has happened in Bolivia as a legitimate process," foreign ministry spokeswoman Maria Zakharova said.

Argentina's president-elect Alberto Fernandez said once he assumes office, he would be willing to offer asylum to Morales and his former vice president Alvaro Garcia Linera.

The European Union's diplomatic chief Federica Mogherini said her bloc supported a solution that looked toward new elections and a way "to avoid a power vacuum, which could have dire consequences for the entire country."

Anez gave the first indication of her government's foreign policy by recognizing Venezuelan opposition leader Juan Guaido as his country's president -- a key shift of alliance in the volatile region.

The announcement removes one of Venezuelan President Nicolas Maduro's main allies as he fends off efforts to oust him amid a deadly economic and political crisis. Maduro's opponents have branded him a dictator. Morales backed Maduro.

Guaido has declared himself Venezuela's rightful acting president. He has gained the recognition of 50 countries, including the United States, but has so far failed to dislodge Maduro.