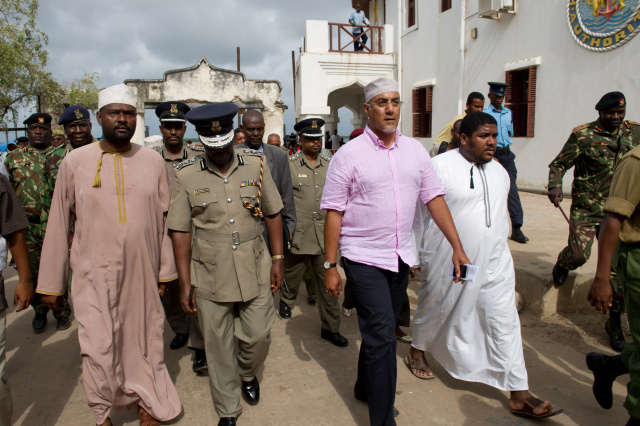 Kenyan Minister for Tourism, Najib Balala (2R), walks through Lamu to address a meeting of hoteliers and investors in the Kenyan resort on October 3, 2011. Kenya has sent mediators to Somalia to negotiate the release of a disabled Frenchwoman abducted on October 1 from her beachfront resort home, a security official said. More than a million tourists visited the country in 2010, bringing in 76.3 billion Kenyan shillings (570 million euros). (AFP PHOTO/PHIL MOORE)

(AFP) - Kenya and Somalia have agreed to "normalise" relations and start reissuing travel visas to each other's citizens after a long-running dispute over marine borders strained ties between the neighbours.

The East African leaders "reaffirmed the invaluable relations that exist between Kenya and Somalia and agreed to explore avenues of strengthening bilateral and diplomatic ties" between them, a statement from Kenyatta's office said.

Kenyatta and Mohamed, better known by his nickname Farmajo, were seen smiling and shaking hands in photographs posted by the Kenyan presidency on Twitter.

The statement made no mention of a territorial dispute between Somalia and Kenya over a stretch of the Indian Ocean claimed by both nations believed to hold valuable deposits of oil and gas.

Relations between Mogadishu and Nairobi deteriorated earlier this year after Somalia decided to auction off oil and gas blocks in a disputed maritime area.

Nairobi recalled its ambassador from Mogadishu in February in the row over which of the East African neighbours controls access to the lucrative deposits -- a dispute they've taken to the International Court of Justice.

The contested triangle of water, which stretches over an area of more than 100,000 square kilometres (40,000 square miles), lies in a part of Africa only recently found to be sitting on significant energy reserves.

Somalia also accused Kenya earlier this year of detaining and confiscating the passports of Somali ministers trying to enter the country.

Somalia had also raised concerns that Kenya has reinstated a mandatory stop at Wajir, near the border between the two countries, for a security check on all flights from Somalia, a practice discontinued in 2016.