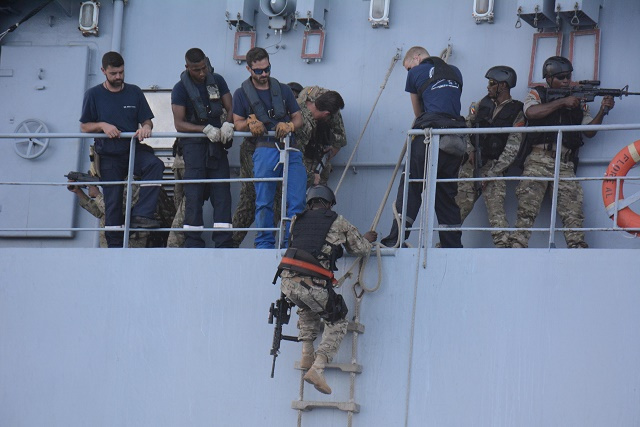 One of the exercises in Cutlass Express 2016 carried out at sea where the participating forces dealt with scenarios involving piracy, illegal trafficking and illegal fishing. (Patrick Joubert, Seychelles Nation)

The training spearheaded by the United States Naval Forces Africa in partnership with Canada, the European Union and the East African region, took place for nearly three weeks in October and November. Around 50 military personnel took part in this year’s exercise.

The exercise was conducted around Djibouti, Madagascar, Mauritius, and Seychelles, as part of a commitment to regional stability and maritime security.

Speaking at the closing ceremony at the Seychelles Defence Academy, Ile Perseverance on Saturday, the Chief of Staff, Colonel Michael Rosette, said this year’s exercise has taken a new twist, as it has been executed at different locations around Africa and the Indian Ocean region. Each location concentrated on specific elements relating to maritime safety and security, maritime domain awareness and information sharing.

“Cutlass Express is one of those exercises that we all look forward to participate in, as it provides a great opportunity for numerous countries to learn and train together, sharing best practices and to physically go out there and put into practice what they have learnt together,” said Rosette.

He added that Seychelles remains committed in its leadership role and “in doing its fair share in ensuring that our region remains safe and secure.”

On her side, Rear Admiral Nancy Lacor of the United States Naval Forces Africa told participants that "with exceptional professionalism, you have demonstrated that by working together we have the capacity to counter threats in a complex maritime environment."

She added that "exercises like Cutlass Express build our military capacity and strengthen our proficiency to counter threats by increasing interoperability."

The Cutlass Exercise was designed to assess and improve combined maritime law enforcement capacity and promote national and regional security in East Africa as well as information sharing, planning and operating.

It included board, search and seizure procedures, best practices and interoperability with partner nations. It also had information sharing between Maritime Operation Centres, adherence to the rule of law and counter-proliferation interdiction capabilities in order to disrupt illicit trafficking and piracy.

Focused scenarios for the cutlass exercise included the interdiction of illicit arms, drugs, money and people that pose a threat to regional stability or international partners.

“From the briefing I have received from my staff, I am glad to note that the various scenarios and training sessions have been executed as planned and that participants have gained adequately from these two weeks, and furthermore, that the exercise is continually improving and getting more and more complex and realistic with time,” said the Chief of Staff.

The Seychelles archipelago consists of 115 islands spread over an exclusive economic zone of 1.4 million square kilometres, making it difficult for enforcement authorities to spot unlawful activities.

This was the ninth Cutlass Express exercise and the last one for the year.