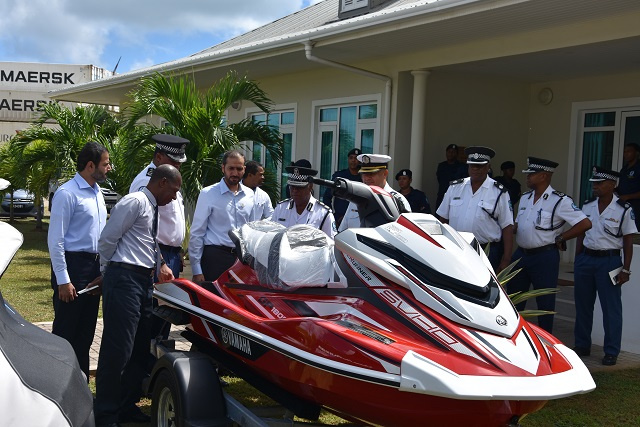 The high-speed Yamaha jet skis were handed over to the Commissioner of Police on Friday. (Anti-Narcotics Bureau)

The high-speed Yamaha jet skis were handed over to the Commissioner of Police, Kishnan Labonte, by the Charge d’ Affaires of the Embassy of the UAE in Seychelles, Ahmed Alneyadi.

The ANB, which was previously the National Drug Enforcement Agency (NDEA), became a department in the Seychelles Police in a restructuring of the police force in 2017.

Speaking at the ceremony on Friday, the UAE Charge d’ Affaires said the jet skis were part of his country’s commitment to help Seychelles fight criminal activities.

Alneyadi added that “UAE and Seychelles share a special relationship with a strong foundation of shared values and common objectives which have grown significantly over the years. “

On his side, the Commissioner of Police said that “the Seychelles Police Force is grateful towards the UAE for having been a supportive partner for many years now and for the long history of positive interaction that continues to exist between the two parties.”

He added that the jet skis will be used by the Anti-Narcotics Bureau’s Marine Unit to conduct much needed maritime operations in the waters of Seychelles, an archipelago in the western Indian Ocean.

The jet skis and the recent training of ANB officers in professional security and surveillance in UAE totalled up to SCR 1.6 million ($113,000) in value.