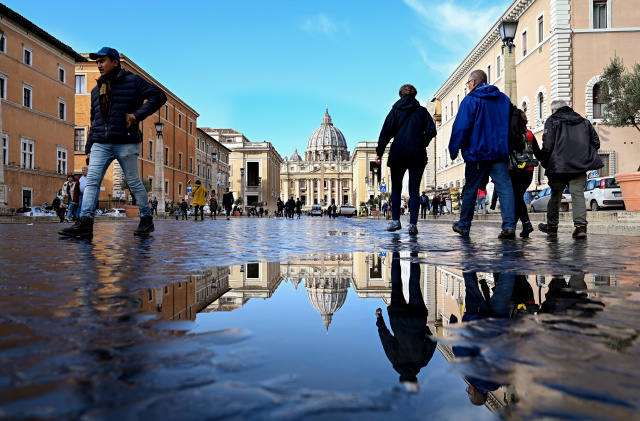 Pedestrians are reflected in a pool of rainwater on Via della Conciliazione in Rome, leading to the St. Peter's basilica in the Vatican (Rear) on November 18, 2019.
(Vincenzo PINTO / AFP)

(AFP) - Venice sought to return to normal life on Monday after a week of unprecedented flooding that devastated the city, submerging homes, business and cultural treasures.

The wave of bad weather that struck throughout Italy -- from rivers of water rushing through the streets of the southern town of Matera to tornados in the Grosseto region of Tuscany - was still a concern in certain areas, and was expected to continue.

In the north, the Trentino-Alto Adige region bordering Austria was at high risk of avalanches, forecasters said, with continued strong rains expected to batter the region around Genoa and the island of Sardinia.

Schools reopened in Venice as shopkeepers with mops and buckets in hand tried to muck out the water and mud that had flooded their stores since Tuesday.

Venetians are accustomed to flooding in their UNESCO city surrounded by a lagoon, but last week's wave of inundations was unprecedented in modern times, with Tuesday's high not seen since 1966.

St Mark's square, in one of the lowest points of the city, begins to flood when the tide rises 80 cm above sea level, according to Venice's tides authority.

"Forms will soon be available to citizens and businesses to claim compensation. Thanks to all who worked so hard to get through the day," tweeted Mayor Luigi Brugnaro on Sunday, after the waters submerged yet again an estimated 70 percent of the city.

Outside a gallery, painter Davide De Guglielmi, vowed to reopen after cleaning up.

"We're built like that, we're stubborn. We know the price we have to pay to live in this city," De Guglielmi told AGI.

"We've lost almost everything," he said. "All the Christmas orders had just arrived: new frames, gift cards...," he said.

Forecasters expect the waters not to exceed 110 cm in Venice in coming days, allowing residents to assess the damage that the mayor has already put at over a billion euros.

On Sunday, residents of Florence and Pisa braced for possible flooding of the Arno river, but the two Tuscan cities managed to escape flooding or damage and a state of alert was lifted.

In Italy's northeast heavy snowfall on Sunday provoked an avalanche that grazed a populated area of the Martell Valley in the Alto Adige, without causing major damage.

About 30 highways in the area remained closed to traffic on Monday and schools were shut.