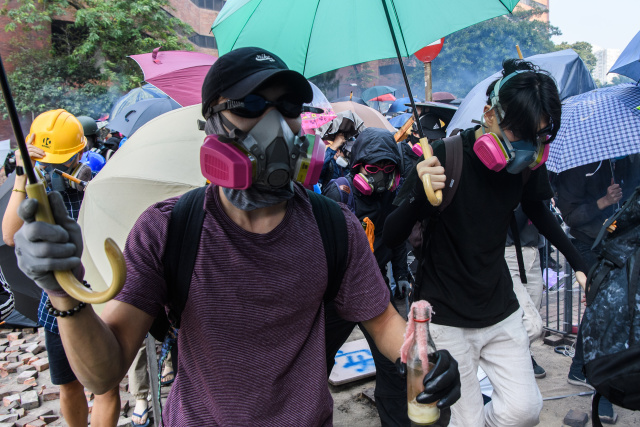 Tear gas is fired by police as protesters attempt to escape the campus of the Hong Kong Polytechnic University in the Hung Hom district of Hong Kong on November 18, 2019. Hong Kong riot police swooped on pro-democracy protesters trying to flee a university they had set ablaze, in one of the most violent confrontations seen in nearly six months of unrest. Hundreds of demonstrators clashed throughout the day with police who had threatened to use deadly force, as protests also flared in other parts of the city. (ANTHONY WALLACE / AFP)

(AFP) - Relatives of some of the young pro-democracy protesters holed up inside a Hong Kong university held anxious vigil Tuesday as police vowed to arrest those inside.

Around 100 demonstrators remain barricaded inside Hong Kong Polytechnic University (PolyU) surrounded by riot squads who have been besieging them for three days.

One mother in her 50s, whose surname is Chan, said she was terrified that police would storm the campus with guns blazing and her 18-year-old son would be injured or even killed.

"I'm worried when the police go in to attack there will be heavy casualties, a Tiananmen 2.0," she said, referring to the 1989 quashing of pro-democracy protests in the Chinese capital that left hundreds, perhaps thousands, of people dead at the hands of the Chinese military.

A woman named Cheung said she had spent last night in a park near a police cordon as she waited for news of her adult son, who she said came to the campus as a first aider.

"I was very, very worried, worried his life could be in danger. He's scared. He's scared about being arrested by the cops," she said.

Demonstrators, who took to the streets in their hundreds of thousands in June over a now-shelved bill that would have allowed extradition to China, are demanding the right to elect their own leaders, as well as an inquiry into alleged police brutality.

Protest tactics morphed in the last 10 days into a "Blossom Everywhere" strategy of disruptive vandalism that has brought much of the transport network to a standstill and shuttered schools.

But the three-day PolyU occupation is the most serious and sustained episode yet.

Another mother, identified by her surname Chung, told the South China Morning Post her 16-year-old daughter was still inside the university, despite assurances that minors would not face any immediate legal action if they surrendered.

"No one can ask her to come out now. She wants to walk out freely, and does not believe the police at all," she told the paper.

"She communicates with me but refuses to listen to me."

A father in his 50s, who gave his name as Wong, said his 17-year-old daughter had initially refused to surrender because she feared arrest and a ten-year jail term for rioting, but had finally agreed to come out with her school principal.

"I'm worried about her personal safety, the legal stuff we can sort out later," he told AFP.

"If the police really go in to clear the place, once they're inside no one knows what would happen in there. Anything could happen and we can't predict.

"If in the worst case scenario, they really use live rounds, they could give any story they want and we wouldn't know what really happened... Who would people believe?"

Cheung said she just wanted her son to come out safely.

"I believe they won't charge my son, because he's just helping people... He's not one of the people in black, he doesn't have masks at home or any other tools like that, he just came out in jeans, a T-shirt and a windbreaker."

The government, however, has shown no willingness to compromise, with chief executive Carrie Lam saying Tuesday that those inside the campus had no option but to surrender.

The increasingly unpopular police force has vowed to arrest everyone, insisting that they must face the force of the law.

"What would become of Hong Kong then?"