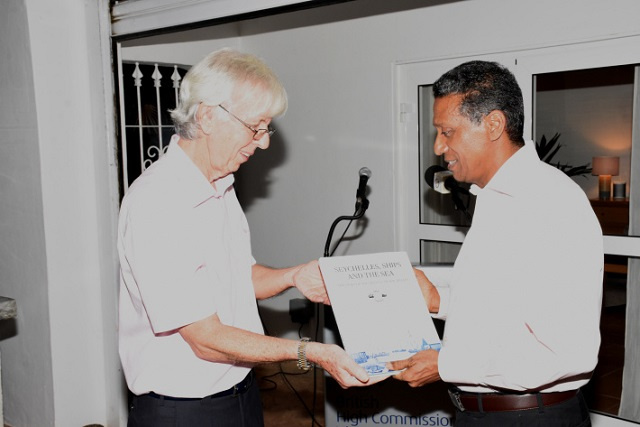 Skerrett presented a copy of the book to the President of Seychelles, Danny Faure. (Seychelles Nation)

(Seychelles News Agency) - A book on the maritime history of Seychelles and the Indian Ocean with chapters on pirates and shipwrecks is now available.

Entitled ‘Seychelles, Ships and the Sea,’ the hardback historical work which is on sale in local bookshops at SCR 400 ($29) was launched last week.

The launch coincided with the celebration of the 50th anniversary of the Mahe Shipping company, which sponsored the publication.

Editorial director Adrian Skerrett said the book looks back at the earliest times.

“The first chapter is a history of the Indian Ocean in maps and that goes back literally to the very earliest of times when the first maps were produced and I find this fascinating because so little was known. To begin with, there were no islands on the map and even when they did appear, they were usually placed wrong,” said Skerrett.

He added that the book was a great project as it was a unique contribution of all the best-known historians of Seychelles into a single book.

'Seychelles, Ships and the Sea’ comprises of chapters about the history of the Indian Ocean, different types of ships, shipwrecks as well as a chapter about the modern port and the future of the shipping industry.

It shows the symbiotic relationship between the ships, islands and the people of Seychelles from the earliest times to modern-day. The authors who contributed were Adrian Skerrett with twelve chapters, his wife Judith Skerrett, with four chapters, William McAteer with a chapter on whaling ships, Julien Durup on schooners, Tony Mathiot on lighthouses, Malinda Skerrett on pirates and Gerry Adam on the modern port and the future.

It also includes personal stories from Lorna Drake and Gitanne Gendron, two Seychellois whose lives have been hugely influenced by the shipping links of Seychelles.

At the launching last week, the British High Commissioner to Seychelles, Patrick Lynch, said the book describes the central role that the ocean plays as the lifeblood of island nations.

He noted that “oceans shape our work, our culture, our cuisine, our music, our art and it gives us a very welcome sense of humility and perspective.”

Lynch spoke of the shared experience of the ocean of the United Kingdom and Seychelles, an archipelago in the western Indian Ocean.

“For example, the scourge of piracy was massively reduced through collaborative working with experts here in the Seychelles and we continue to work in many areas of maritime security. The UK strongly supports the world-leading efforts of Seychelles on the Blue Economy and the need to ensure maritime protection and sustainable approaches to working in our oceans,” he said.

The book ‘Seychelles, Ships and the Sea’ is Adrian Skerrett’s 21st book about Seychelles, 11 of which have been published by Camerapix International based in Nairobi.