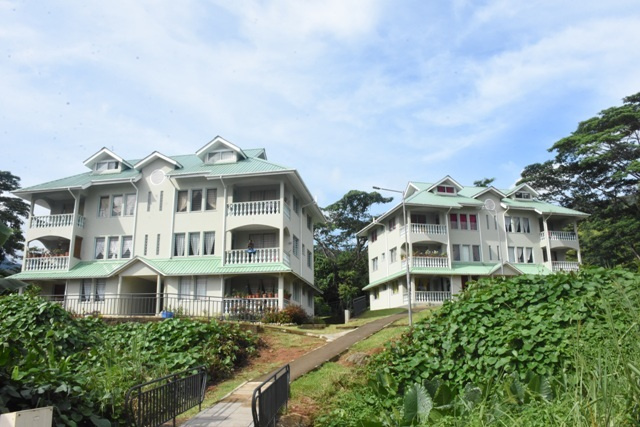 (Seychelles News Agency) - A 42-unit social housing estate in the western Mahe district of Grand Anse was officially inaugurated on Monday, as officials said a further 30 units will be built in the future.

The Orchid Village, named after the orchid farm formerly located on the site, is part of a 106-unit project constructed at three sites -- Grand Anse, Bel Ombre and Takamaka on the main island of Mahe.

The cost of the three estates amounted to over $6.8 million. Funding was made through a grant from the United Arab Emirates through the Abu Dhabi Fund for Development.

The Grand Anse site has an overall masterplan design for 72 units, 42 of which has been completed. The works done include road and parking infrastructure and a sewage treatment plant which will cater for the future phase of housing development.

The Orchid estate has 22 three-bedroom units and 20 two-bedroom units. Construction started in August 2015 and ended in December 2017.

One of the new tenants, Maryse Robert, said, “I am happy to have received a flat here even if there is a level of disturbance coming from the neighbours when they play loud music. I try not to bother myself with these.”

Robert told the press she previously lived in a bedsitter for 17 years and was then transferred to a three-bedroom house at the Ex Cable site at Anse Boileau with her daughter and son.

“When this site was completed, I was transferred here as I no longer needed a three-bedroom house. This house is occupied by my son and me, as my daughter received her own house,” she added.

The grant covered the technical consultancy as well as the construction work. The implementation mechanism from project conceptualisation to implementation allowed the participation of local partners and contractors.

GIBB Seychelles was appointed as engineers and project manager, producing a design to ensure that the basic functions of such an estate are up to standards. The building contractor - Mahe Design and Build - has ensured the implementation of this design is followed accurately.

“This is yet another successful outcome of the robust and friendly relation that exists between the UAE and Seychelles. Since 1976, Abu Dhabi Fund for Development has been committed to supporting the government of Seychelles, achieving the strategic national growth agenda, stimulating the economy as well as creating job opportunities,” said Mohammed Saif Al Suwaidi, the director-general.

Provision of housing remains a priority of Seychelles' government.

The principal secretary of the Infrastructure Department, Yves Choppy, said that by the end of the year the government will be handing over the Ex Cable project at Anse Boileau, the Baie Lazare project as well as that on Grand Anse Praslin. There are other projects being completed.

“The demand for social housing is still high as for the past few years, the number of houses that we were building was not meeting the demand. There was also the effect of economic reform. We have a backlog that we need to clear and as such, we have a project to build about 3000 houses in the next six years,” said Choppy.

He added that “this will allow us to clear the backlog, putting people in a situation where they won’t have to wait too long for a house.”

The Minister for Habitat, Pamela Charlette, said the housing estates funded by the UAE are a significant contribution towards our housing programme which the ministry and the people of Seychelles are very grateful for.”