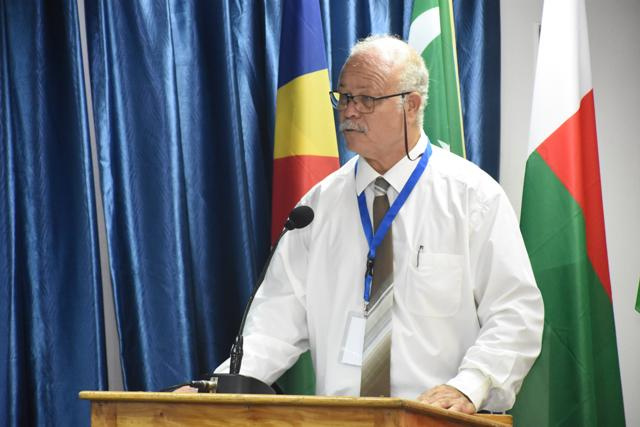 (Seychelles News Agency) - The mandate of David Andre, the mayor of Seychelles’ capital city, Victoria, will end on December 31. The 60-year-old took office on January 1, 2017, for a three-year term.

SNA spoke to Andre about his achievements the past three years, the challenges of the post and his view on a mayor being elected rather than appointed.

SNA: You are the first man to be appointed mayor in Seychelles. Do you think you were qualified for the post since you are known as an artist?

DA: As you are aware, following the parliamentary elections in 2016, the opposition grouping – Linyon Demokratik Seselwa (LDS) - won 15 seats, becoming the majority party in the National Assembly. One of the issues they wanted to address was how the Mayor of Victoria was selected

Of course following the elections, the previous Mayor resigned to take up another post at State House. So when the post became vacant, LDS proposed that the Mayor should be chosen by the directly elected members of the eight districts that make up Victoria.

My name was then proposed by the LDS MNAs. I was a bit reluctant at first but then I thought of all the contributions I could bring as a person who knows Victoria and who grew up in the area, so I accepted the challenge.

All the eight members of parliament, whose districts make up Victoria, interviewed me and I was confirmed unanimously. Six opposition MNAs and two from the United Seychelles all felt I had the qualities to do the job that was required of me

SNA:  Since you were proposed by LDS, does this mean that in your work as a Mayor, your political agenda is in favour of the opposition?

DA: I do not have any political agenda when I am in the office of the Mayor. People may know that I am associated with the opposition but the opposition MNAs do not dictate how I do my work and neither does the party in government, the United Seychelles.

I do share my vision, my plans for the Mayor’s office, with both sides. But there’s no political affiliation when I’m doing my job and no one to date has tried to influence me. I am a professional and a patriot and, I work for Seychelles.

SNA:  Do your projects touch/impact all eight districts that make up Victoria?

DA: Yes I have regular discussions with the MNAs and district administrators where we talk about projects that concern all the eight districts – English River, Mont Buxton, St Louis, Bel Air, Mt Fleuri, Plaisance, Roche Caiman and Les Mamelles.

There’s also a working group called Victoria Forum which was initiated by the previous mayor, Jacqueline Moustache-Belle. It brings together representatives from various government agencies and we discuss and prioritise projects for Victoria, to make it more welcoming, clean and attractive to locals and foreigners.

SNA: As Mayor in the past three years, what projects have you been able to implement for Victoria?

DA: When I took over I did an evaluation to see what was missing in the capital and of course I had my own vision for our little city.

On a practical level, one area that I felt needed immediate attention was the main market, Selwyn Selwyn Clark. With the Seychelles Agricultural Agency, we carried out some renovation work on the place to raise its standard.

There’s also the cultural aspect where we launched a publication to coincide with the 240th anniversary of our town -- a book that retraced the history of Victoria and Seychelles.

Another project that I personally initiated was ‘La Passerelle’ – the waterfront park project, which opened recently and which has a cafeteria, kiosks for artists, a stage where they can perform or exhibit their work as well as a public toilet.

SNA: Have there been any discussions with the private sector?

DA: I’ve met with the Seychelles Chamber of Commerce and with businessmen individually and I am very disappointed with their responses. Most of them cite financial or economic issues that prevent them from investing in any new project. We all complain that Victoria is dead but we don’t want to do anything to make it livelier.

SNA: How is your working relationship with the local government department -- your parent ministry?

DA: I have a good working relationship with the department and we always consult and discuss any project that concerns the eight districts. The local government department works directly with the districts and my office has a lot to offer to the districts. So it is important to have this collaborative approach. For example, we have a number of twinning programmes which have benefitted various districts in fields such as sports, culture, economy, capacity building among others.

Presently there is a recycling programme between Seychelles and Ile Possession of Reunion. There has been a number of exchanges between the senior citizens clubs of Mauritius and those from Seychelles, partnership with various Chinese cities among others.

So together with the local government department we are moving in the right direction and working toward a common goal for the country.

SNA: The office of the Mayor is given a lot of importance in other countries, compared to Seychelles. With no significant budget do you feel the office is useful?

DA: It is true that the role of mayor is limited in Seychelles but at the same time, when something is working why change it. As I mentioned earlier, many government agencies are mandated to do specific work in Victoria, so I don’t think the office of the Mayor should come in and replace them. We complement what they are doing, we become their partners.

However, what I would like to see is for the office of the Mayor to be more autonomous in the way it functions because we have to admit that a lot of red tapes still exist on an administrative level which delays our work.

Presently there is a long procedure which involves the Ministry of Finance and which delays a lot of our work, especially simple little things that could have been done easily if only we were allowed to manage some of our funds for example funds given in the form of sponsorship.

SNA: Do you believe the post of Mayor should be elected by the people?

DA: I don’t have any issues with the person being elected. I think it is more democratic as opposed to appointing a person. But I also think that the way I was chosen was less costly for the government instead of having a separate local election to elect a mayor.

However, going forward what I would like to see is for the post to be open to anyone on Mahe so that anyone can come forward and put their candidature and from there the MNAs elected in the eights districts can select a person from the pool of people.

SNA:  If there is an election for the post of mayor, will you be a candidate?

DA: Yes I would be interested because I have so many projects lined up that I would like to see through. I want to leave a legacy.

SNA:  How do you see the future of Victoria in its sustainable development?

DA: I would like to see Victoria remain as the Creole capital of the world. When a local or visitor comes to Victoria, they will feel the Creole charm, the welcome, see the beautiful architecture and experience our heritage and culture.

Not like a small Dubai or Singapore with all their buildings, a city with its green spaces, less traffic, a safe city, an inclusive town, where regardless where you stay, you’ll feel at home and as if you belong, when you come to Victoria.