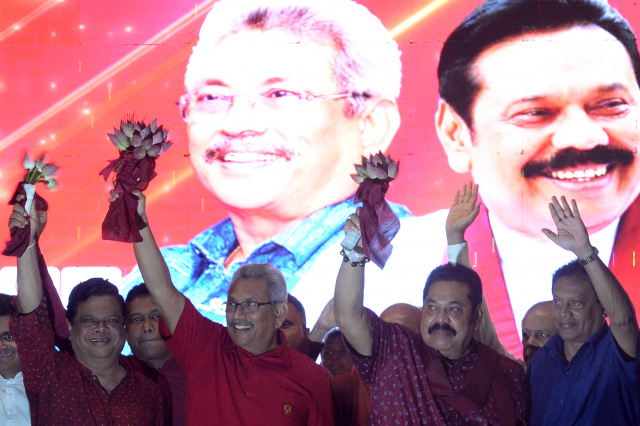 Sri Lanka's new president Gotabaya Rajapaksa gestures during his swearing-in ceremony at the Ruwanwelisaya temple in Anuradhapura on November 18, 2019. Sri Lanka's new president Gotabaya Rajapaksa was sworn in November 18 at a Buddhist temple revered by his core Sinhalese nationalist supporters, following an election victory that triggered fear and concern among the island's Tamil and Muslim minority communities. (Lakruwan WANNIARACHCHI / AFP)

(AFP) - Newly elected Sri Lankan President Gotabaya Rajapaksa on Wednesday named his brother Mahinda as Prime Minister, cementing the grip on power of a clan credited with brutally crushing the Tamil Tigers a decade ago.

Mahinda, a two-term president himself, will be sworn in as premier on Thursday following the resignation of Ranil Wickremesinghe after his party suffered a humiliating defeat at the weekend's presidential polls.

During Mahinda's 2005-15 rule Sri Lanka also moved closer to China, borrowing almost $7 billion for infrastructure projects -- many of which turned into white elephants mired in corruption.

A spokesman for the new administration said Mahinda, 74, will be sworn in by the 70-year-old Gotabaya.

Two other brothers, Basil and Chamal, are also active in politics.

"Prime Minister Rajapaksa will have his cabinet appointed shortly after taking his oath of office," said spokesman Vijayananda Herath.

Gotabaya, a former army lieutenant-colonel, was defence secretary during Mahinda's decade as president.

With the older Rajapaksa taking over as prime minister, Sri Lanka will for the first time have siblings at the helm. During the first Mahinda presidency, eldest brother Chamal was the speaker of parliament.

Wickremesinghe formally announced his resignation Wednesday clearing the way for the Rajapaksas to form a minority government ahead of possible snap elections early next year.

Wickremesinghe's party put forward Sajith Premadasa in the presidential election but he was soundly beaten by Gotabaya in a highly divisive election in the island nation of 21.6 million.

The Rajapaksas are adored by the Sinhala-Buddhist majority -- but loathed among minority Tamils -- for spearheading the defeat of separatist militants in 2009 to end the 37-year civil war.

One analyst said Sinhala-Tamil division could widen under the new regime.

"The strongly Sinhala nationalist character of Gotabaya's campaign, his reliance for the win almost entirely on votes from Sinhalese, and his brother's policies... all suggest that persistent ethnic and religious tensions ... could dangerously sharpen," said Alan Keenan of the International Crisis Group.

Around 40,000 Tamil civilians were allegedly killed by the military in the closing stages of the conflict when Gotabaya effectively ran the security forces.

During the three-month election campaign held in the shadow of Islamist extremist attacks in April, Gotabaya pledged to make his charismatic and popular brother Mahinda prime minister.

Wickremesinghe came to power in 2015 on a promise to prosecute members of the outgoing Mahinda regime -- who were accused of corruption and even murder -- but he failed to bring any perpetrators to justice.

He ended up facing accusations of cronyism and incompetence himself, and was also implicated in several financial scandals.

The current parliament was elected in August 2015 for a five-year term and cannot be dissolved until at least March next year. Legislators can, however, ask for a snap poll through a majority resolution.