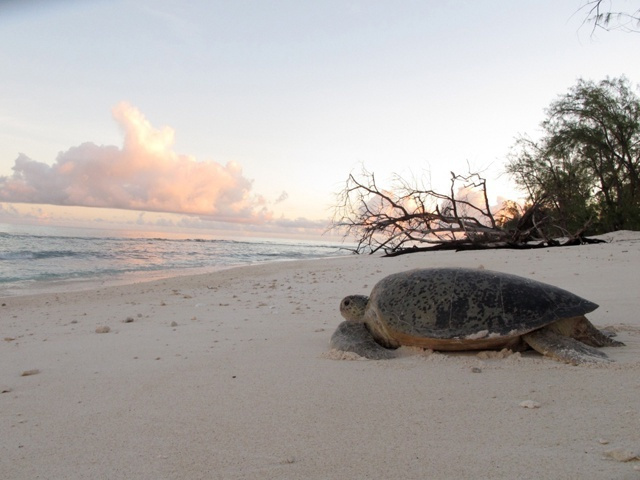 File Photo: Green turtle heading back to the sea after nesting on Aldabra. (Seychelles Islands Foundation)

(Seychelles News Agency) - The turtle poachers hunt at night, so conservation officers in Seychelles are increasing their nighttime patrols.

Thousands of sea turtles have started their annual migration to the shores of the Seychelles islands to lay their eggs, and conservationists have increased monitoring efforts and surveillance, patrolling the beaches where they know turtles come to nest.

Environment Conservation Officer Ashley Pothin said that this year “the authority is intensifying their efforts as there have been a few cases of poaching.”

“We are not only monitoring during the day, but we are also doing surveillance after hours as we have noticed that illegal activity mainly occurs at night,” Pothin told SNA this week.

Seychelles, an archipelago in the western Indian Ocean, is home to one of the world's largest population of the green and hawksbill turtle.

The green turtle breeds all over the islands throughout the year, unlike the hawksbill turtles which breed mostly between mid-October and mid- January.

Both species are on the International Union for Conservation of Nature’s (IUCN) red list. Green turtles are classified as endangered while the hawksbills are critically endangered.

With regard to the number of cases related to poaching, Pothin said cases have been recorded at North-East Point - in the north and in the southern part of the main island of Mahe.

Pothin said that more poaching is occurring in the southern part because the beaches are more isolated and out of sight, making it easier for poachers.

“This is why we are asking members of the public to give a helping hand and to report on any suspicious activities,” said Pothin.

Sea turtles in Seychelles are protected under the Wild Animals and Birds Protection Act and the penalty for offenses is up to two years in prison and a fine of up to $37,000.

Despite the strict laws, poaching is still a major concern because of the country's tradition of turtle meat as a delicacy. In most cases, because they are the ones that lay eggs, females are more vulnerable.

The conservation officer said that over the years a lot had been done to protect sea turtles and even though “we have seen a decrease in poaching incidents, still there are a few individuals who are taking the risk."

Apart from human-related threats, other menaces include eggs that are washed away by waves and steep crests and obstacles inhibiting the female’s progress across the beaches to lay eggs.

Once hatched, babies are a favorite food for ghost crabs, birds, and fish. Another emerging threat is dogs frequenting beaches and digging up eggs from the nesting holes.

Sea turtles lay around 150 to 200 eggs depending on species and that takes around two to three hours. The hatchlings will emerge after eight weeks of incubation.

Surrounded by lush, tropical flora overlooking the turquoise waters of the Indian Ocean, Banyan Tree Seychelles resort is a true Sanctuary for the senses. Here, guests can also witness this beautiful natural phenomenon of marine turtles nesting on the resort’s beach.

The resort works closely with the Marine Conservation Society of Seychelles (MCSS) to monitor turtle activity on the Intendance Bay as part of the MCSS’ conservation efforts.

Last season they calculated at least 10,000 new hatchlings made their way into the water.

The project officer of the conservation center at Banyan Tree, Rebecca Filippin, said that they also play a huge role in surveillance and monitoring of nest in the south, especially at Intendance.

“Aside from observing marine turtles as they arrive to lay their eggs, guests can also observe turtles hatching as well as visit the turtles at the rehabilitation center,” said Filippin.

The resort recently launched a special programme, “Management of Turtle-Human Interactions and Turtle Rehabilitation”, to rehabilitate injured marine turtles before they are released back into the wild.