A third of Africa's tropical flora threatened with extinction: study 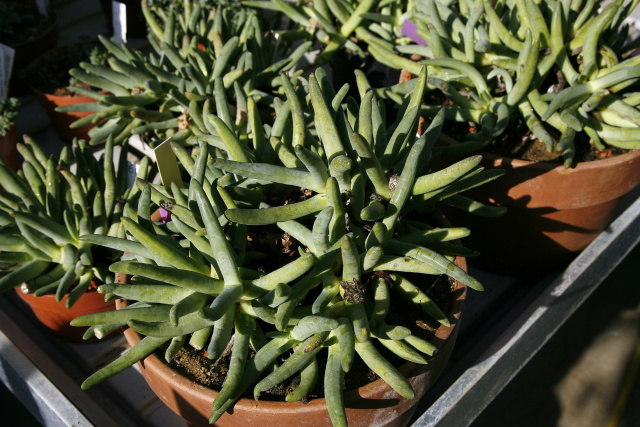 The 'Cylindrophyllum hallii' plant, a highly threatened species from South Africa, is pictured at Kew's Millennium Seed Bank in Ardingley, in south-east England, on October 15, 2009. Botanists at Britain's Kew Gardens said Thursday they have collected seeds from 10 percent of the world's wild plants, their first goal in a project to protect all endangered plant species. Seeds from a wild, pink banana are the latest addition to the collection at Kew's Millennium Seed Bank, designed to guard against dwindling diversity. The banana from China, musa itinerans, is an important staple for wild elephants and is also useful for breeding new types of the fruit, but is under threat as its jungle habitat is cleared for commercial agriculture. (AFP PHOTO/Glyn Kirk)

(AFP) - A third of the species of tropical plants in Africa are potentially threatened with extinction, according to a preliminary estimate published Wednesday by the journal Science Advances.

The most authoritative list of threatened species is the famous "Red List" maintained by the International Union for Conservation of Nature (IUCN).

While this list is relatively complete for mammals and birds, it is full of gaps when it comes to plants, only 10 percent of which have been assessed. These assessments are fastidious and time-consuming, and there are more than 350,000 plant species in all.

To work around this problem, a team coordinated by a botanist from the French National Research Institute for Sustainable Development, Thomas Couvreur, carried out a computer analysis of the status of more than 22,000 vascular plant species in tropical Africa.

To perform the analysis, they used information compiled in a database called Rainbio that is maintained by the French Foundation for Biodiversity Research.

The result was that 32 percent of the species, or nearly 7,000, were classified as likely or potentially threatened, based on either of two criteria recognized by the IUCN -- a recent reduction in population size or geographical distribution.

The regions found to be most at risk were Ethiopia, the center of Tanzania, the southern Democratic Republic of Congo and the forests of West Africa.

This rapid method is "a cost-effective way to initiate the Red List assessment process for a large number of species," the researchers wrote.

But "the two approaches are complementary. There still needs to be an important international effort to evaluate all the plant species in Africa," Couvreur said in a statement.