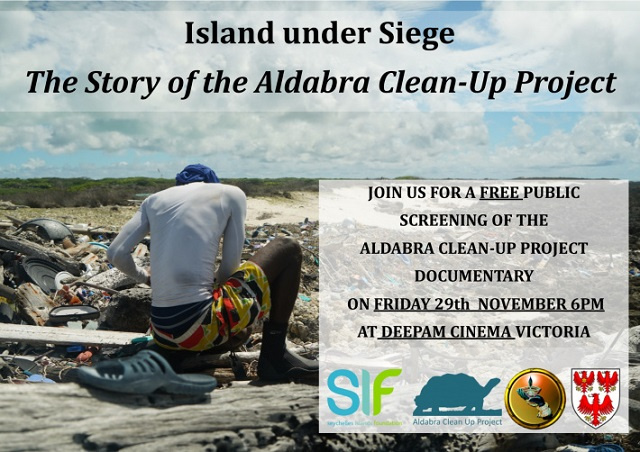 The 24-minute documentary goes behind the scenes of the five-week expedition from February 22 to March 29. (Seychelles Nation)

(Seychelles News Agency) - A documentary film on the Aldabra clean-up project called 'Island Under Siege' will be screened for free at Deepam Cinema in Victoria on Friday, November 28 at 6 p.m.

The 24-minute documentary goes behind the scenes of the five-week expedition from February 22 to March 29 in which over 25 metric tonnes of plastic pollution from Aldabra Atoll was removed.

'Island Under Siege' reveals the scale of the global issue of plastic pollution as well as the realities of living and working on a remote island.

The project officer of the Seychelles Islands Foundation (SIF), Jeremy Raguain, told SNA that the documentary film has been made to raise awareness on the marine plastic issues.

"We need to turn off the tap. We should stop using plastic as much possible. And those using it should not use the ocean as a dumping ground," said Raguin.

The film was produced by SIF and Queen's College of the University of Oxford to educate the public about plastic consumption and the impact it has on cherished natural sites such as Aldabra.

A free screening will be done at the Deepam Cinema on Praslin, the second-most populated island. A shorter version has been entered into the International Ocean Film Festival.

Raguin said that the documentary film is not only for Seychelles but will be accessible to other countries "as part of our educational outreach effort."

During the clean-up, the waste collected was weighed, sorted and taken to the base camp of each outer island and shipped back to Mahe, the main island. It cost the team around $104,600 to charter a cargo boat to collect and transport the waste.

Aldabra -- one of the world's largest atolls -- is a UNESCO World Heritage Site in Seychelles, a group of islands in the western Indian Ocean. The atoll which is located 1,000 km from Mahe, the main island, consists of four main islands of coral limestone separated by narrow passes and enclosing a large shallow lagoon.

Raguin said that part of the whole project is also to make the film available to all schools around Seychelles, an archipelago in the western Indian Ocean, so it can be used in the curriculum.