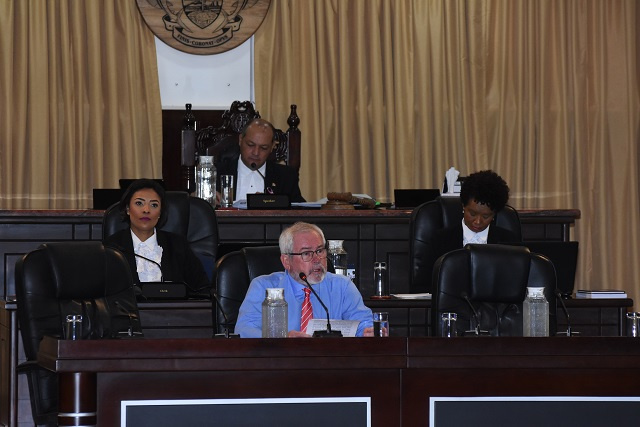 The Minister for Finance, Trade and Investment, Maurice Loustau-Lalanne, was called to the Assembly on Friday to answer an urgent private notice question. (Seychelles Nation)

The Minister for Finance, Trade and Investment, Maurice Loustau-Lalanne, was called to the Assembly on Friday to answer an urgent private notice question from both the Leader of the Opposition and the Leader of Government Business over the transaction.

Wavel Ramkalawan and Charles De Comarmond asked the minister for all details of the transaction including how much SPF invested in this venture.

“I sincerely think that this transaction is a good one for both companies – for Pension Fund and for Cable & Wireless. We must keep it in mind that this is Seychellois – 100 percent. We must ensure stability for all the employees and shareholders who have invested a lot and their own money,” said Lalanne.

The Minister explained that the five shareholders have made an investment of $43.5 million, money which he said they have worked hard for and which they are now investing in and that it was important to recognise their substantial investment.

“I am convinced that this is a good investment, which will bring benefits to the company and this will lead to money staying in Seychelles instead of being sent overseas,” Lalanne added.

Lalanne provided the details that he had and informed the Assembly that representatives of the Seychellois investors who bought the telecommunications company approached the SPF in September to purchase 220 shares in the company for $24 million.

It was also revealed on Friday that two board members of the Pension Fund have resigned over this transaction.

In a press release on Thursday, the opposition coalition, the Linyon Demokratik Seselwa |(LDS), had said that it "is alarmed at the possible ramifications of the transaction by the Fund and called for immediate action on several fronts to avert what may be an attempt to exploit the resources of the Fund for the benefit of some individuals.

"LDS finds this feature of the transaction totally unacceptable. Not only did the SPF miss the opportunity to make the investment in a timely manner at a better price if it wished to do so, but it may have been served as simply a vehicle to enrich other persons," stated the press release.

The Seychelles Pension Fund announced on Wednesday that it has acquired a 20 percent equity share in the Cable and Wireless of Seychelles with the aim of diversifying its investment portfolio.

The chairperson of the Board – Jaquelin Dugasse – said during a press conference that the Pension Fund’s investment to buy the 20 percent share ownership in Cable and Wireless has ensured it a seat on the board of the company.

"The board feels it is a good investment and an opportunity. To date, the Pension Fund has invested in the Seychelles Commercial Bank, SACOS (State Assurance Corporation), Seychelles Breweries Limited and it has always been our wish to invest in telecommunications," explained Dugasse.

Seychelles' opposition political party warned that the Fund may have paid too high of a price for the purchase and called for "immediate action" to protect the Fund's beneficiaries.

Cable and Wireless Seychelles is the first telecommunications company to establish in Seychelles – 115 islands in the western Indian Ocean – in 1954.

It was purchased by a consortium of local entrepreneurs earlier this month at $130 million from Liberty Global, one of the world's largest television and broadband companies. The purchase makes CWS the country's first completely Seychellois-owned Telecommunication Company.

The new owners include the JFA Group comprising Jamshed Pardiwalla, Ravji, Rahhwani, and Andy Bainbridge, as well as Victoria-based professional services firm ACM, which represented the shareholders in the deal.