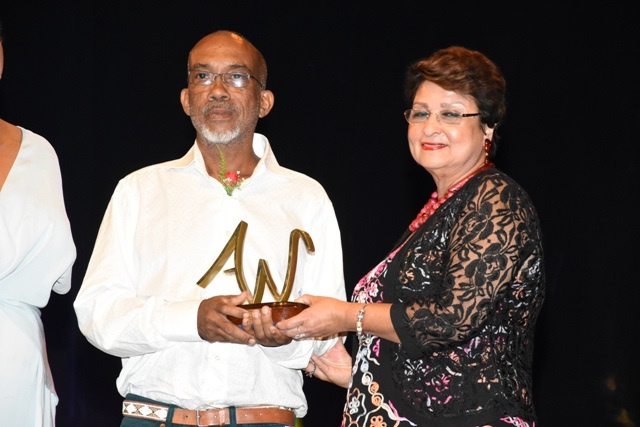 (Seychelles News Agency) - Contributors to the island nation's rich arts and culture have been awarded through the Seychelles Arts Award.

The second edition of the Arts Awards, which is organised every two years, was held on Saturday at the International Conference Center in the capital city of Victoria.

The 19 categories are not a competition but rather are to recognise, appreciate, and reward the contribution and devotion of local artists in the development of the arts in the island nation.

"Today I am very happy because all that I have been doing over all these years, have finally been recognised," said the youthful-looking Matombe, who is well into her late 80s.

Matombe, who hails from Anse Boileau, has her roots in the traditional music and romantic songs of the 115 islands archipelago in the western Indian Ocean.

"What makes me prouder is that all that I have learned I am not keeping to myself but sharing with others," added the awardee.

Marday, who started his career as a science teacher, is now a well admired and respected sculptor specializing in artificially sculpted rocks.

"I would like to thank everyone who has supported me. Since a child I have loved the arts – something that lives in us humans, through different societies, different nations since the beginning of time," said Marday, who works full time as an artist as he also paints.

Five new categories were introduced for the 2019 Seychelles Arts Award including an international award -- recognising a foreigner who has made significant contributions and has supported the arts and culture of the island.

This was won by Mauritian Daniel Delord who has collaborated with many local artists on different music albums and musical shows.

Speaking of the quality of the artworks submitted for this year's award, chairperson of the selection committee John Etienne highlighted the importance of hard work to produce powerful art.

"All the works need to have a purpose. We need to differentiate between powerful art and mass culture. We need to understand works of quality and mediocrity," said Etienne, adding that the committee expects works of a higher standard in future from some categories.

The awards are organised by the National Arts Council and its chief executive said it was important to valorise and push local artists forward.

"Two years ago we started the 'New Frontier' movement in recognition of our artists as individuals with creativity that can make a difference, who are intelligent and who can bring about change in our society," said Jimmy Savy.

Savy added "emphasis this year is on quality of work and recognising artists that have played a pivotal role in promoting the culture and valorising local arts."