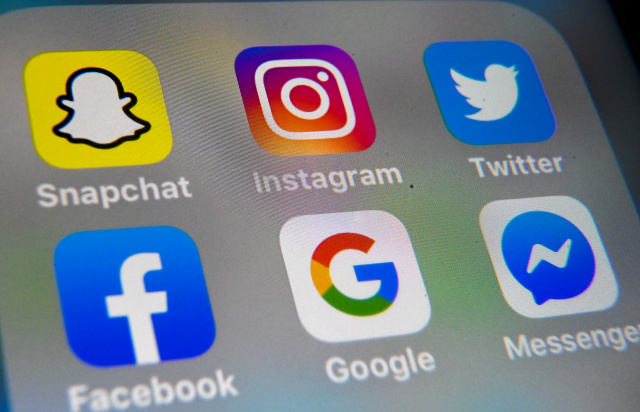 (FILES) In this file photo taken taken on October 1, 2019 in Lille shows the logo of mobile app Instagram, Snapchat, Twitter, Facebook, Google and displayed on a tablet. The US State Department on November 23, 2019 called on Facebook, Instagram and Twitter to suspend the accounts of Iranian government leaders until Tehran re-establishes internet coverage throughout the riot-torn country. The government imposed a near-total Internet blackout more than a week ago amid violent protests. (DENIS CHARLET / AFP)

(AFP) - World Wide Web inventor Tim Berners-Lee on Monday unveiled a "Contract for the Web" to halt "misuse" by governments, companies and individuals, bringing several capitals and tech titans like Google aboard.

"If we don't act now -- and act together -- to prevent the web being misused by those who want to exploit, divide and undermine, we are at risk of squandering" its potential for good, Berners-Lee said in a statement from his World Wide Web Foundation.

Credited with laying the groundwork for the web -- the universe of multimedia webpages accessible via the internet -- in 1989, the computer scientist has since last year been developing the so-called Contract for the Web.

His unveiling of the final document Monday comes as government, business and civil society leaders gather in Berlin for the four-day UN Internet Governance Forum.

Berners-Lee said his contract, developed in cooperation with dozens of experts and members of the public, is "a roadmap to build a better web".

He called on governments to "strengthen laws and regulations" and companies "to ensure pursuit of profit is not at the expense of human rights and democracy".

Meanwhile, the governments of France, Germany and Ghana are on board, as are thousands of individuals.

"I will stand up for the preservation of the free internet that we have grown to know and love in recent decades," German economy minister Peter Altmaier said in a statement ahead of the UN gathering.

Berners-Lee originally conceived the web while working at European particle physics lab CERN, as a way for scientists around the world to share information about their research.

But in recent years he has grown alarmed by abuse of the technology in society, business and politics.

The WWW Foundation highlighted rising cyber-bullying, growing use of the web by politicians to manipulate news media and widespread online scams.

It also noted that rates of web access in emerging economies lag far behind those in industrialised nations, with 46 percent of people worldwide not online.

"We need real and durable involvement of emerging and developing countries," Germany's Altmaier said. "Free access to the internet must be a fundamental, human right, valid for people around the world."

As well as his "Contract for the Web", Berners-Lee has looked to tackle the web's issues from a technical angle, in 2018 launching a development platform called "Solid" aimed at giving users control of their data.