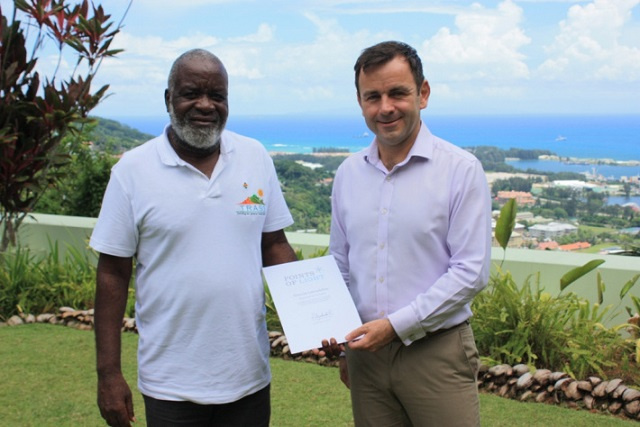 The tireless work of Seychellois Victorin Laboudallon in the conservation of the Seychelles’ environment has been recognized by Her Majesty Queen Elizabeth II.

Victorin - often referred to as a giant and pillar in reforestation efforts – was recognized as the 118th Commonwealth Point of Light.

Each Commonwealth Point of Light receives a personalised certificate signed by Her Majesty The Queen as Head of the Commonwealth.

This is in honor of Laboudallon's exceptional voluntary service championing the conservation of the island nation’s pristine but yet fragile environment.

"All my life, I have dreamt of protecting and defending the environment of Seychelles. In my retirement, I chose to be active and ensuring that the next generation gets a world better than the one they see today,” Laboudallon told the press on Friday after receiving his recognition from British High Commissioner, Patrick Lynch.

The awardee is a founding member and the chair of the Terrestrial Restoration Action Society of Seychelles (TRASS).

“I am very happy to receive this award on behalf of all the volunteers of TRASS, colleagues and more-so the people of Seychelles. In the face of climate change, plastic pollution and other issues affecting our planet, this award gives us as a nation and me, as a person, the impetus to continue beyond 100,000 trees!"

Based on the second-most populated island of Praslin, the not for profit organization has mobilised thousands of volunteers to rehabilitate the eroded mountains of Praslin with an average of 15,000 plants every year.

“Planting trees through TRASS is a life-long dream and I am proud to pass on my knowledge to the next generations. Nothing makes me happier than dedicating my otherwise idle mornings and afternoons and my Saturdays to planting trees,” said Laboudallon.

TRASS also manages a nursery producing 12,000 to 15,000 endemic and indigenous plants every year. The nursery sustains its regular tree-planting events. These are aimed at combatting deforestation on the island – known for its red soil mountain – a result of forest fires and severe erosion.

The volunteer-based group also plants mangroves which are a natural defense against the impacts of rising seas and coastal erosion.

Laboudallon - a former conservation officer with the Ministry of Environment –is credited for the works he has done to conserve the native coco de mer tree. He also led an artificial nest-boxing programme which saved the Seychelles’ national bird, the endangered black parrot.

Since last year, Her Majesty The Queen has been thanking inspirational volunteers across the 53 Commonwealth nations for the difference they are making in their communities and beyond.

The Queen is recognising one volunteer from each Commonwealth country each week in the two years following Commonwealth Heads of Government Meeting held in London last year.

By sharing these stories of service, the Commonwealth Points of Light awards celebrate inspirational acts of volunteering across the Commonwealth and help inspire others to make their own contribution to tackling some of the greatest social challenges of our time.

"We are thrilled that Victorin’s achievements have been recognised with the Commonwealth Points of Light Award. He is an incredibly worthwhile recipient and has been an inspiration to generations of Seychellois conservationists,” said Lynch.

The British High Commissioner added that “his work, both professional and voluntary, has helped shape the way we understand the flora and fauna in Seychelles and this award commends his tireless efforts."

The Commonwealth is a diverse community of 53 nations that work together to promote prosperity, democracy, and peace. The Heads of Government meeting brought together leaders from all the 53 member countries to reaffirm common values, address shared global challenges and agree on how to work to create a better future for all citizens, especially young people.

Voluntary service is a vital part of this agenda, which is why Her Majesty The Queen has chosen to recognise outstanding volunteers across the Commonwealth in this special way.