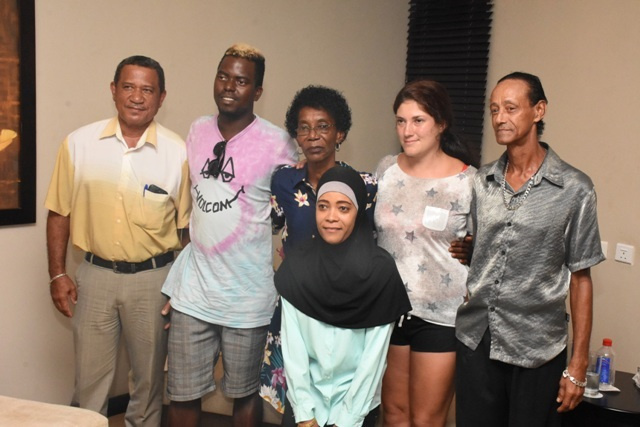 (Seychelles News Agency) - Moses Pracht, a German national of Seychellois origin who was abandoned at birth near a bin site in Seychelles in March 1991, reunited on Monday with the people who found him.

The reunion took place at the Seychelles International airport at Pointe Larue before Pracht and his wife Isabell left for Frankfurt where they reside.

Pracht had an emotional reunion with Ray Maria - the man who found him 28 years ago. Maria was accompanied by his daughter, Lysa and former partner, Medline Augustin.

Also present was former police officer Paul Belle, who was on the scene on that fateful night 28 years ago.

Pracht and his wife Isabell arrived in Seychelles, an archipelago in the western Indian Ocean, for the first time earlier this month on their honeymoon, with the hope of meeting the persons that saved his life as a baby.

Speaking to reporters on Monday, the German, who now has a young daughter, said he knew early on that he was adopted and the circumstances that led to his adoption.

He said he had always wanted to meet with the persons who came to his rescue.

"I cannot find words to express how I feel now. I am so happy to finally meet the guy who picked me up. I'm very lucky," said an emotional Pracht.

Ray Maria was the first person who came upon the abandoned baby. He recounted that the baby was in a plastic bag which had been left by a bin site, at Anse Des Genets, in the eastern part of Mahe, the main island.

Maria said he was returning home from an evening walk with his seven-year-old daughter, Lysa, when he heard a baby crying.

"I remember the night vividly. It was around 9 p.m. on March 21, 1991 and I thought it was odd that a baby would be crying by the roadside at this late hour," recounted Maria.

He said upon closer investigation he made a shocking discovery.

"It was then that I saw a plastic bag moving as if something was trying to get out. I tore the plastic bag and I saw this newborn. As soon as I tore open the bag, he could breathe better and started wailing," said Maria.

The police officer who responded to the call was Paul Belle, the Station commander at the eastern district of Cascade Police Station.

"It was the first time that I came face to face with such a situation and I didn't know what to do. So I quickly sought the help of a lady who lived nearby – Flora Dubignon- who has since passed – and asked her to assist us. She brought towels and together we organised for the baby boy to be transported to the hospital," said Belle.

Maria who said he was the one who named the baby Moses, had already expressed his intention to keep him. However, he learned later that he had been adopted by a German couple, four months after he was found.

"I am so happy today because I never expected to see him. God has blessed me and I am so grateful to finally see him again," said Maria.

Pracht said he has no intention of searching for his biological parents.

"I wanted to meet the people who saved me, not the ones that left me by the roadside in a plastic bag," he said.

The young man described his visit to Seychelles as overwhelming, as he did not expect to get so much attention.

"It's been crazy. Everywhere I go people call my name. Everybody wants to talk and take pictures with me. That's ok. We wanted to enjoy our holiday here and everybody accepted us," said Pracht.

While in Seychelles, Pracht met with President Danny Faure at State House.

Faure expressed how happy he was to receive him and how his life represents a blessing and shows the higher forces at work.

"Your story is inspirational, and you are blessed. It is a great privilege for me to receive you here, your story is a very special one and for a government committed to the progress of its people, the stories of our citizens are very important to me. This is why I was so keen to meet you and I thank you for making the time," said President Faure.

Pracht also met with the Commissioner of Police who dealt with his case 28 years ago, and the nurse at Victoria Hospital who took care of him as a newborn.