A shootout and a visit from a Duke: 8 November events in Seychelles' history 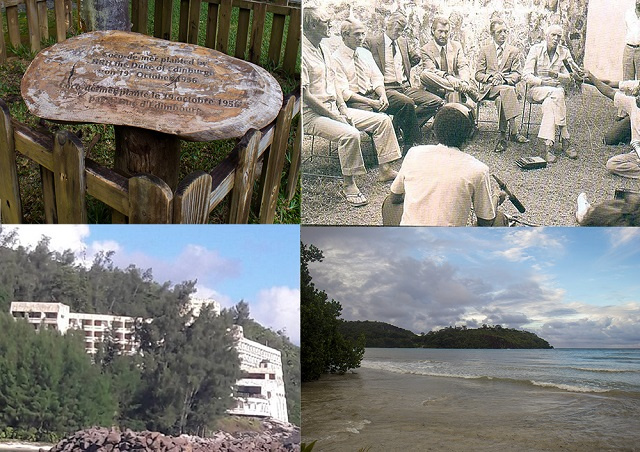 November serves as a reminder for most adults of the stress that the month ahead brings. Whilst many cringes at the thought of the madness that Christmas brings to Victoria, the town centre, SNA walks you down memory lane to eight historical events that all happened in November.

Captain Nicholas Morphey took possession of the Seychelles for France and the Pierre de Possession (stone of procession) was placed in a location which is today at Francis Rachel Street in the heart of the capital city of Victoria as confirmation of French sovereignty.

The Marion Dufresne expedition arrived at the Island of Praslin which is named after César-Gabriel de Choiseul-Chevigny, Duc de Praslin, the French Minister of Marine at that time.  It was on that same day, that the marvelous coco-de-mer nuts were discovered.  The nut is endemic to the islands and grows in its natural state at the Vallee de Mai.

The Mahe Beach Hotel at Port Glaud in the western part of the main island of Mahe was opened by the Prime Minister, James Mancham. Designed by Graham McCullough, the 352-bedroom tourist establishment represented an investment of $4.4 million. It had a complex of suites, restaurants, bars and a swimming pool. In 1998, the Mahé Beach Hotel was the venue for the Miss World Beauty Pageant.

Governor Montagu George de Symons Honey unveiled a war memorial at the Mont Fleuri Cemetery. Constructed of coral blocks, it bears the names of the Seychellois men who died in East Africa during the First World War (1914-1918).

Every year, on Armistice Day, a ceremony is held at the site. The inscription on the cenotaph reads: “To the glory of God and in memory of these men of the Seychelles carrier corps who risked and lost their lives for King and Country in East Africa in the years of the Great War and whose graves are unknown.”

The Duke of Edinburg Prince Philip husband of Queen Elizabeth II made a stopover in Seychelles and left the next morning. He was welcomed at the airport by the Administration and Manpower Minister, Joseph Belmont, and spent the night at the British High Commissioner’s residence in the central district of Bel-Air.

It was strictly an unofficial stopover and the third visit of Prince Philip who was the patron of the Worldwide Wildlife Fund. In 1956, he planted a coco-de-mer tree in the Botanical Garden. In 1972, he accompanied the Queen on an official visit to inaugurate the Seychelles International Airport.

Lazare Picault – a French explorer - arrived at Mahe, where his two ships Tartane and Charlie dropped anchor at Anse Boileau in the west of the main island of Mahe. Ashore, sailors gathered hundreds of coconuts and giant tortoises which they took away. The expedition had been organised by Mahé de Labourdonnais who was the Governor-General of Mauritius.

The first Beauty Pageant to be held in Seychelles was at the Beau- Vallon Beach Hotel. The winner was Marie France Lablache of Hermitage. There were fifteen participants.

A group of 45 South African mercenaries arrived at the Seychelles International Airport aboard a civilian flight from Swaziland in the guise of a beer-drinking club called “Ye Ancient Order of Froth Bowers”. Their leader was Colonel Mike Hoare, the mercenary commander during the Congo uprising in the early 1960s.

A gun battle with the Seychelles Peoples Defense Forces ensued after which most of the mercenaries fled back to South Africa aboard a hijacked Air India plane. The few who were left behind were caught by the Seychelles forces. In 1986, Mike Hoare wrote a book about the ill-fated mission called “The Seychelles Affair”.