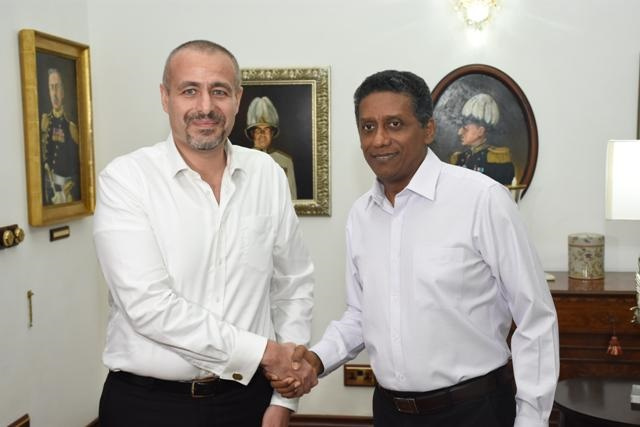 Khaled El Abyad presented his letter of accreditation as the ambassador of Egypt to Seychelles to Faure on Tuesday. (Seychelles Nation)

(Seychelles News Agency) - The possibility that three Seychellois prisoners serving life sentences in Egypt could be transferred to the prison in Seychelles was raised with President Danny Faure, the newly accredited ambassador said on Tuesday.

Khaled El Abyad presented his letter of accreditation as the ambassador of Egypt to Seychelles to Faure on Tuesday at State House.

"We talked about if the prisoners could be transferred to the prison facility in Seychelles to serve the rest of their sentences. We would do our best in that regards noting that drug trafficking is a very serious offence in Egypt,” said El Abyad.

The three Seychellois -- Ronny Norman Jean, Yvon John Vinda and Dean Dominic Loze -- were sentenced to death by execution on April 7, 2013 after being found guilty of drug trafficking. In 2015, their sentences were commuted to life imprisonment.

The ambassador said, “Our President in 2015 has allowed the prisoners to be transferred to a better prison facility to allow my colleague in Addis Ababa to visit them. We understand the situation of the family, and we would do whatever we can to deal with this situation.”

El Abyad and Faure also talked about the possibility of investment between the two countries.

Also accredited on Tuesday was Christian Fellner, the new ambassador of Austria to Seychelles.

The meeting between Fellner and President Danny Faure was an opportunity to discuss areas of future cooperation geared towards further strengthening relations between the two countries.

Fellner also talked about the commonalities that exist between Austria and Seychelles and said that human rights and the rule of law are key priorities that both countries should focus on to maintain peace and order.

The environment was also a point raised during the meeting between Fellner and Faure.

“We are a landlocked country and we are called the island of the Benedictine. The environment is very important for us in Austria and already more than 70 percent of our electricity comes from renewable energy,” he said.

Tourism, which is the top contributor to the economy of Seychelles, an archipelago in the western Indian Ocean, was also discussed.

Fellner said, “Austria gains about eight percent of its gross national product from tourism. Seychelles also is very dependent on tourism, which makes us very specialised. We also want to offer young Seychellois students scholarships to study in any tourism-related field.”

Other potential areas discussed were conservation, health and renewable energy.