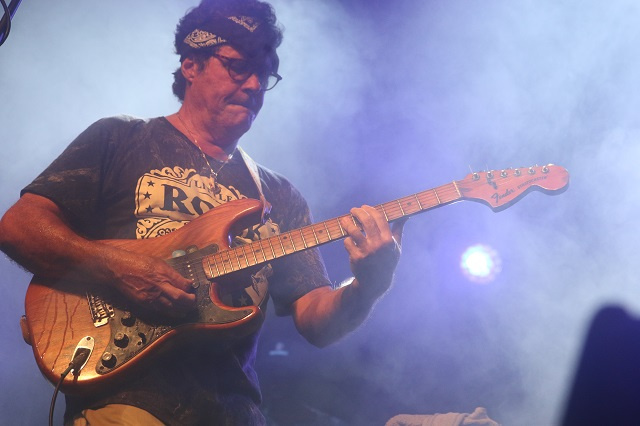 (Seychelles News Agency) - Creole music infused with reggae vibes was a la une at this year's Creole festival as a Seychellois artist with international hits – Sonny Morgan – enthralled fans. Morgan performed at the festival which was held the last week of October.

Through his music Morgan has demonstrated how the traditional Indian Ocean "Sega" music of the island nation can be blended with more modern influences to create a potent sound.

Morgan is renowned for his unique style, and originality is very important to him. Although founded on a Reggae/Sega beat, the artist continues to experiment with integrating different musical styles such as the Blues into his music.

SNA spoke to the artist whose songwriting talent has been recognised internationally – he won first prize in the prestigious "Unisong" international songwriting contest in America and has also won similar awards in Australia.

SNA: Tell us a bit about yourself your background and childhood.

SM: I was born on La Digue. I left Seychelles as a minor with my parents who went to Australia. By the age of 14, I could not carry on with my education and at the same time, my mother came back to Seychelles. I was left in a foster home and at 14 years old after seeking permission I started to work so that I could pay my way.

SNA: Music-wise when and how did it all start?

SM: Music was always there. I started at a very young age and did my first gig on La Digue at the age of 12 and got paid 15 rupees ($1). And things got more serious when I returned to Australia and where in the early seventies I formed a group where we played at the Seychelles club and weddings.

SNA: Describe your life as a Seychellois artist in such a huge country as Australia.

SM: In 1973, I went to Perth and started to take my music to another level and played with people who had more experiences in the music industry. I then joined the Islanders band and by 1974 I started to work as a professional doing up to 13 gigs a week, working in hotels and night clubs as well.

So then I went back to Melbourne and started playing with different players mainly rock-orientated music. By 1982 I got tired of doing covers and went to the recording studio for the first time. A year later, I recorded my first single with Martin Clark who owned Clarion Records. This was followed by my first cassette album entitled Coco de Mer. One year later I had another cassette out called La Digue.

SNA: What are the highlights of your musical career?

SM: In 1989 Martin Clarke told me: let's have a crack at the UK and European market. By then the album Coco de Mer was recorded and had tracks in reggae styles. A record deal was negotiated and I got my first record contract. The album was released in early 1990 and I was the first Seychellois to get a record contract and the first to release on a CD. Well, the rest is history, signed by a German label for two albums: Island People and Sega Nights in 1994. I then moved to Gotham Records and released This World is For Everyone in 2002, Tropical Experience in 2004 and Ras Digwa 2007 amongst others.

In all, I have 13 albums along 126 registered songs with Apra Gemma and SACS. I have also won several awards at Unisongs contest including Wammi Australian Award for World Music in 2000. Sadly Seychelles is the only place that I haven't had any recognition yet but as the saying goes _plus tot tard que jamais!_

SNA:  How do you describe yourself and the progress made over the years?

SM:  Long term listeners to my music can hear the evolution of my music over the last 20 years. Whilst I have kept to my original Sega roots, my music has taken on a 21st-century beat. My music is no longer only appreciated in the Indian Ocean, but is succeeding in the US and European markets with haunting songs like "War War War" and the reflections of a coming of age modern businessman with "Clean Cut" - not forgetting "Rasta Man" with guest vocals from the charismatic 'Aswon' and a fantastic video to accompany it.

SNA: And your plans for the future?

SM: Now I am semiretired and my days are spent here - on Praslin, my adopted island, and Australia. I have the luxury of time to write songs for what I believe in. I am not under pressure from producers or record companies to come up with crappy hit songs, Radio Gaga songs, etc. (laughs). I'm not with any labels, so everything is calm, am enjoying my gardening and I do not like noisy neighbours with loud music.

SNA: And what do you think of the musical scene here?

SM: I hope the real music doesn't disappear and what is left is only manufactured laptop music which everyone can produce.