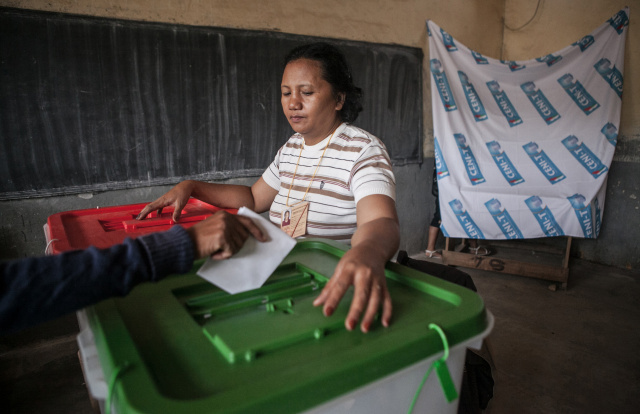 A poll worker wait for voters at a polling station during the presidential election on December 20, 2013 in Antananarivo, Madagascar. Ten million voters in Madagascar were called out to vote Wednesday in local elections where the biggest prize is the capital Antananarivo, held by the opposition. (AFP PHOTO / RIJASOLO)

(AFP) - Ten million voters in Madagascar were called out to vote Wednesday in local elections where the biggest prize is the capital Antananarivo, held by the opposition.

Voting in the Indian Ocean island nation is the latest test for President Andry Rajoelina, who won presidential elections last December and whose coalition won parliamentary elections in June.

The elections are for 1,695 mayors in 119 administrative districts. More than 6,200 candidates have taken to the field.

"Every citizen of voting age should carry out his duty, because this is going to have an impact on the future of our towns over the next five years," Rajoelina said after voting in the capital's district of Ambatobe.

Five candidates are vying for Antananarivo.

Rajoelina's IRD party is putting forward Nanina Andriatsitohaina, a billionaire media tycoon and former foreign minister who is close to the head of state.

Rajoelina and Ravalomanana have dominated the country's politics since the early 2000s, sometimes cooperating but mostly fighting for advantage and high office.

The former French colony is well known for its vanilla and precious redwood, yet is one of the world's poorest nations, according to World Bank data, with 76 percent of people living in extreme poverty.