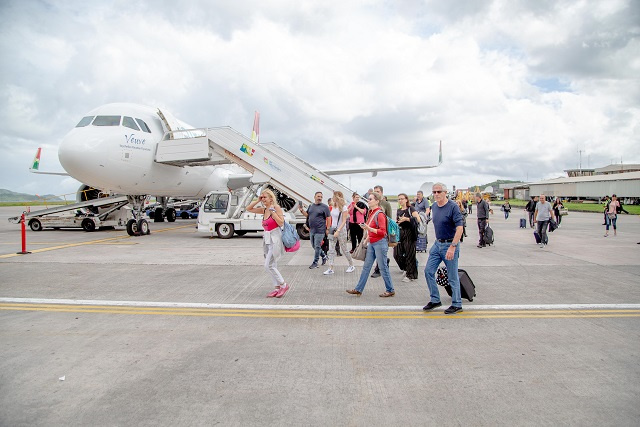 (Seychelles News Agency) - Seychelles now has a direct link with Tel Aviv following the touchdown of the inaugural flight carried out by the island nation's airline on Thursday.

Air Seychelles' non-stop flight HM021 landed at the Seychelles' international airport with 120 passengers -- the maximum capacity for the plane.

The Minister of Civil Aviation, Didier Dogley, said, "Since Air Seychelles stopped flying internationally, we needed to find ways to use the two planes in a more optimal manner, to optimise the revenue coming in."

He said that due to the high amount of competition on the Abu Dhabi route "we saw that a lot of revenue was being lost on the flight. When the route is cancelled the planes became idle and there was a need to look for alternative ways to fill in this slot. What is important for us was to look for a destination to which Air Seychelles can fly with little to no competition."

Air Seychelles is currently flying to Mumbai, Johannesburg, Mauritius and seasonally to Madagascar.

The Minister added that Israel is just within the range that planes operated by the national airline can fly to.

"We said why not send the plane to Tel Aviv rather than have an idle plane or increasing flight frequencies on the existing routes. One arrangement the government made with Air Seychelles was that for the airline to be able to fly to Tel Aviv, it will have to sell 80 percent of its seats in advance," said Dogley.

This means that flights to Tel Aviv do not operate as scheduled flights but rather as chartered ones -- tickets are sold before the plane can fly.

Plans to fly to the commercial city of Israel was announced in July as a move to strengthen business, tourism and cultural ties between the two countries. Additionally, it is a boost to traffic and onward connections to other destinations across the airline's network.

The flight between Seychelles and Tel Aviv will be operated on Wednesdays and the airline's chief executive said it has been carefully timed to provide business and leisure travellers seamless onward connections to Mauritius and Johannesburg.

"Since we made the announcement to fly on the Tel Aviv route, the feedback from the Israeli market has been very responsive. The extremely strong bookings exceeding 90 percent book load for the upcoming two months has definitely surpassed our expectations," said Remco Althuis, the chief executive of Air Seychelles.

He added that "we are confident that with the support of our partners, both local and abroad, we will continue to bring more visitors from Israel to Seychelles."