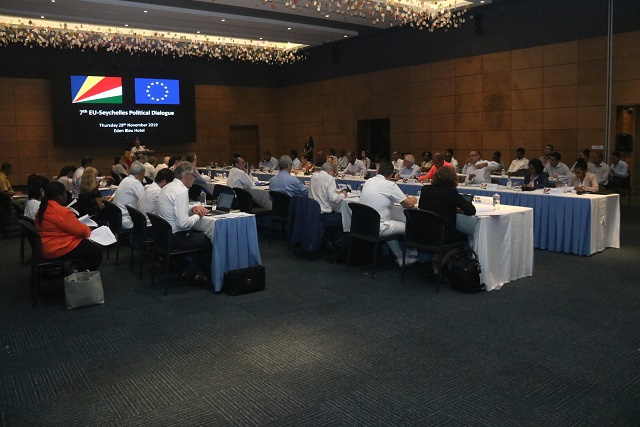 The dialogue held at the Eden Bleu hotel on Thursday saw the two parties agreeing on continued collaboration in several areas. (Seychelles Nation)

(Seychelles News Agency) - Seychelles' government and representatives from the European Union met for the 7th EU-Seychelles Political Dialogue to discuss strengthening the partnership for a sustainable and peaceful future.

The dialogue held at the Eden Bleu hotel on Thursday saw the two parties agreeing on continued collaboration in maritime security, fisheries, health and education and the strengthening of key national institutions including the Anti-Corruption Commission and the Guy Morel Institute.

While opening the dialogue, Vice President Vincent Meriton - who was leading the discussion on behalf of Seychelles' government - said, "The dialogue is a testimony of our engagement towards strengthening the cooperation that exists between Seychelles and the European Union."

"The EU has been closely associated with the development and diversification of our economy and remains a safe anchor and vital link for a modern and forward-looking Seychelles," added Meriton.

"As a likeminded partner, the EU stands by Seychelles and works hand in hand with the government to address global challenges and promote common interests," said Degert.

The ambassador continued by saying 'with a strong role that Seychelles plays on international fronts and the pioneering work that it has done on climate adaptation via, for instance, Debt for Nature Swap, and the issuing of Blue Bonds, Seychelles can serve as a model for peers."

The political dialogue under the Cotonou Agreement covers a broad range of topics. The First EU-Seychelles Political Dialogue took place in the capital city of Victoria in 2012.

Its focus is on specific political issues of mutual concern, including the regular assessment of progress regarding respect for human rights, democratic principles, the rule of law and good governance.

According to Meriton the Human Rights Commission, the Access to Information Act will be strengthened through support from the EU to ensure transparency in the fight against corruption.

"We also spoke about the education sector and where the emphasis was put on the University of Seychelles and the Guy Morel Institute. With the institute we spoke about the need to reinforce its entrepreneurship programme to support government efforts," explained the Vice President.

The two parties also renewed cooperation in the fields of taxation and the fight against money laundering, drug abuse and trafficking, investment, and business climate as well as in environment and conservation.

Over the last four decades, Seychelles has received $44 million in development aid from the European Union under successive European Development Funds, covering various sectors, from Environment to Economic reform programme and Education.

Six ministers and around 20 government officials attended the dialogue alongside their European counterparts, representing 11 member states.