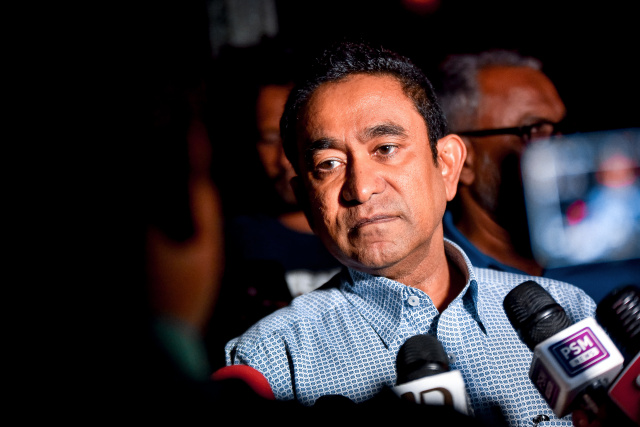 In this photo taken on January 8, 2019 Maldives' former president Abdulla Yameen speaks to the media outside a police station where he had been questioned by investigators on money laundering allegations in Male. Yameen was unexpectedly beaten to the presidency by Ibrahim Mohamed Solih in elections in September 2018, and had been earlier accused by critics of corruption and muzzling the media. (Ahmed SHURAU / AFP)

(AFP) - Disgraced Maldives ex-president Abdulla Yameen was sentenced to five years in prison for money laundering on Thursday after a corruption probe into the former strongman's rule of the luxury tourist destination.

Yameen, who ran the Indian Ocean archipelago with an iron fist before his shock election loss in 2018, was accused of illegally transferring one million dollars from one of his bank accounts during an ongoing graft investigation.

The 60-year-old was arrested in February on charges of bribing witnesses in the ensuing money laundering trial.

Authorities also froze bank accounts belonging to Yameen that held around $6.5 million at the end of last year following accusations he had taken illicit payments.

Investigators believe Yameen could have millions more stashed abroad and are working to repatriate the cash.

Yameen's government regularly jailed opponents or forced them into exile during its five years in power, and the former president relied heavily on China for political and financial support as his human rights record faced criticism.

Current leader Ibrahim Mohamed Solih's won an unexpected landslide victory last year on a pledge to end corruption, and dissidents have since returned to the country.