Seychelles at 250: Island nation’s hospital the foundation of its health 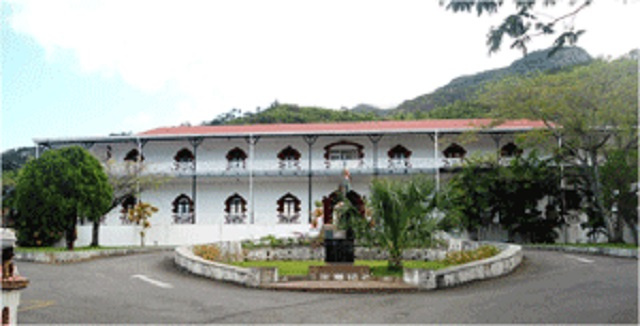 A view of the hospital with its large verandas, ironwork pattern of the balcony, the wafer-white masonry walls and the arched doorways. (Seychelles' National Archives)

(Seychelles News Agency) - The Victoria hospital as it was known back then was opened on Sunday, November 30, 1924. Today 95 years later, the Seychelles Hospital has expanded, modernized and is seen as the cradle of the island nation’s health.

Walking down memory lane to that day, the inauguration was seen as a very important event in the colony and one which was improving the health care system for all.

SNA is looking back at Seychelles’ history ahead of its 250th anniversary in August next year.

Addressing the gathering, which comprised of mostly medical staff, Byrne, who was also a Brigadier General said: “I imagine you will feel proud in possessing a hospital which I submit is second to none considering the size, the resources and the isolation of this small colony.”

According to the historian Tony Mathiot, the governor was referring to the fact that “the accomplishment of an audacious undertaking that had tested his predecessor’s perseverance and symbolising the hope of a small nation of some 25,800 inhabitants.”

Mathiot explained that the decision to build a new hospital originated in the aftermath of the First World War.

“It was a sudden inspiration and it was proposed that a memorial tablet of those who had died during the war should be erected somewhere in Victoria,” said the historian.

Of the 791 young Seychellois volunteers who had joined the Commonwealth forces in East Africa, 335 men lost their lives.

But by, January 1920, it was decided that the memorial should take the form of a hospital.  It was governor Eustace Edward Twistleton- Wykeham Fiennes, who put the idea forward.

Fiennes had assumed the administration of Seychelles – 115 islands in the western Indian Ocean - on July 6, 1918. Shortly after his arrival, his concern for the welfare of the inhabitants became evident when he initiated the construction of the Fiennes Institute, an old People’s home at Plaisance – an eastern district on the main island of Mahe.

His idea that a memorial hospital, a medical establishment that would cater to the needs of all the inhabitants be erected, met with hearty agreement.

Money for this project was raised through subscriptions, the contribution from all districts. Even churches and chapels were asked to make special collections during mass.

The inhabitants were aware that a new hospital was urgently needed. A small hospital named the St. John of God Hospital which had been built in 1866 and stood on the slope where the National House is now located.

All got together to raise funds for the project, from those working in plantations who could contribute only a few cents, to the Indian and Chinese immigrants to residents of the inner islands of Silhouette, Praslin and La Digue.

With limited funds being raised locally, Fiennes sought support from abroad. The British Red Cross Society, the British India Steam Navigation Company, the Eastern South African Telegraph Company and Mauritius, of which Seychelles had been a dependency until 1903, all responded generously.

The site chosen to build the hospital was at Hermitage, on the outskirts of the capital city of Victoria. In March of 1920, work commended and on June 12, governor Fiennes laid the cornerstone.

But funds continued to be a challenge and again and again, work had to stop and the governor had to seek assistance.

At the time, the colony was plagued by hookworm epidemic, tuberculosis, and leprosy and most inhabitants did not have access to medical facilities.

The grim probability that the islands would not have its modern hospital gradually became more likely.

Slowly but surely, the hospital was completed - a huge and magnificent building in true colonial style became the object of admiration.

A splendid creation with large verandas, the ironwork pattern of the balcony, the wafer-white masonry walls and the arched doorways.  It consisted of a resident surgeon’s quarters, maternity section, four wards, and a modern theatre.

The grounds of the hospital was well-manicured, where shrubs, flowers, and palm trees were planted.

In the first years, the wards in the hospital were lit with Coleman lamps. Later a Lancashire generating plant was installed to provide power and in 1929 an X-Ray and electro-therapeutic department started to function.

The medical staff included five hospital nurses. They were sisters of the Order of St Joseph de Cluny, assisted by five trainee nurses. There were also four male attendants, two ward maids, one midwife, one dispenser and a chief clerk.

During its first year, Victoria hospital – named after Queen Victoria – dealt with 731 cases and 29 deaths.

And a first in the history of the islands was the birth of quadruplets to Louise Marie on October 15, 1953. Rachel, Therese, William and Jessie were offered a free supply of Cow & Gate milk food by the Cow & Gate Company Ltd of London, the United Kingdom which also published postcards of the Seychellois Quadruplets.

The quads are all alive and reside in the southern district of Anse Royale. SNA spoke to Therese Marie who said they heard many stories around their birth, including how they were kept in boxes full of cotton.

“There is also our photo in the hospital, in the building where we were born and now used as an administrative block” Marie explained.

Since its opening all matrons were foreigners and sisters from the religious order until September 1966 when the first Seychellois matron was appointed. She was Nella Marie Thérèse Mathiot.

Over the years the hospital expanded, to include a tuberculosis ward, a children’s ward with 22 cots a new storeroom and laundry. In 1955, a hand-operated lift was installed and by 1966 the out-patient clinic was completed.

Ninety five years ago the Seychelles Hospital was a marvelous infrastructure, and today it’s still is. The only difference is that now it offers healthcare, rapid diagnosis, specialized treatments, with the latest state of the art equipment – free for all Seychellois.