Iraqis keep up anti-regime demos despite PM's vow to quit 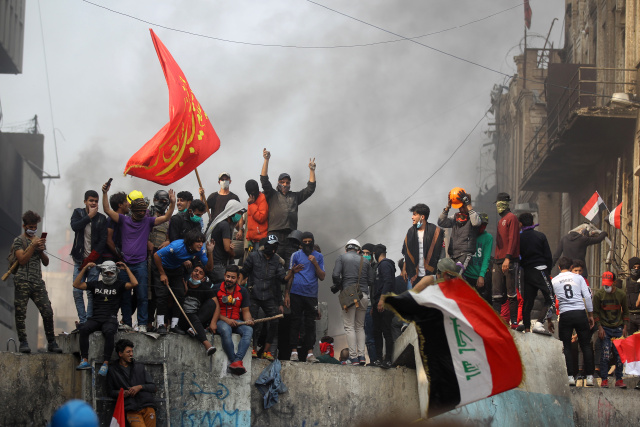 Iraqi demonstrators celebrate by a concrete barricade following the resignation of Prime Minister Adel Abdul-Mahdi's government, during a demonstration along Rasheed Street in the centre of the capital Baghdad, on November 29, 2019. Iraq's embattled premier announced on November 29 he will resign in keeping with the wishes of the country's top Shiite cleric, after nearly two months of anti-government protests that have cost more than 400 lives. (AHMAD AL-RUBAYE / AFP)

(AFP) - Iraqis kept up angry anti-government protests in Baghdad and the south on Saturday to demand a broad overhaul of a system seen as corrupt and under the sway of foreign powers, a day after the premier vowed to quit.

Protesters have hit the streets since early October in the largest grassroots movement Iraq has seen in decades, sparked by fury at poor public services, lack of jobs and widespread government graft.

Security forces and armed groups responded with violence to demonstrations, killing more than 420 people and wounding 15,000, according to an AFP tally compiled from medics and an Iraqi rights commission.

The toll spiked dramatically this week as a crackdown killed dozens in Baghdad, the Shiite shrine city of Najaf -- where another protester was killed Saturday -- and the southern hotspot of Nasiriyah.

Facing pressure from the street and the country's top Shiite cleric Grand Ayatollah Ali Sistani, Prime Minister Adel Abdel Mahdi announced on Friday that he would submit his resignation to parliament, due to meet Sunday.

But demonstrations have not subsided, with crowds in Baghdad and across the Shiite-majority south sticking to their weeks-long demands for complete regime change.

"We'll keep up this movement," said one protester in the southern city of Diwaniyah, where thousands turned out on Saturday.

"Abdel Mahdi's resignation is only the first step, and now all corrupt figures must be removed and judged."

"We won't leave our barricades until the regime falls, until we get jobs, water, electricity," one protester said.

The units dispersed a sit-in on one bridge in the city but protesters held two more, according to AFP's correspondent.

Authorities have declared a day off on Sunday -- the first day of the working week -- for civil servants in Najaf, Karbala and Nasiriyah and the surrounding provinces.

This week's surge in violence started when protesters stormed and burned the Iranian consulate in Najaf late Wednesday, accusing Iraq's neighbour of propping up the Baghdad government.

Over three days, 42 people have been shot dead in Nasiriyah -- Abdel Mahdi's birthplace -- as well as 23 in Najaf and three in Baghdad.

The rising death toll sparked a dramatic intervention from Sistani, the 89-year-old spiritual leader of many of Iraq's Shiites.

In his Friday sermon, Sistani urged parliament to stop supporting the government, and hours later, Abdel Mahdi announced he would submit his resignation.

Iraq's Supreme Judicial Council on Saturday said it had formed a committee to probe the unrest, pledging to "punish those who attacked protesters".

Accountability for those killed has become a key demand of protesters in Iraq, where tribal traditions -- including revenge for murder -- remain widespread.

"Every victim has a mother, a father, a tribe who won't stay quiet," said a Baghdad protester.

"Otherwise there could be civil war."

Even cities that have been relatively peaceful, including Hilla, held mourning marches for those killed in recent days.

Abdel Mahdi's other main backer, the Fatah bloc, called for "necessary changes in the interests of Iraq" in a departure from its usual statements supporting him.

Since promising to submit his resignation, Abdel Mahdi has continued to hold meetings, including with cabinet and the United Nation's top representative on Saturday.

Iraq's constitution does not include a provision for the resignation of a premier, so submitting a letter to parliament would trigger a motion of no-confidence.

If parliament meets on Sunday and passes such a motion, the cabinet would stay on in a caretaker role until the president names a new premier.

Chief justice Faeq Zeidan is one of several names being circulated as a possible replacement.