Anger, hope and pleas for action at UN climate meet 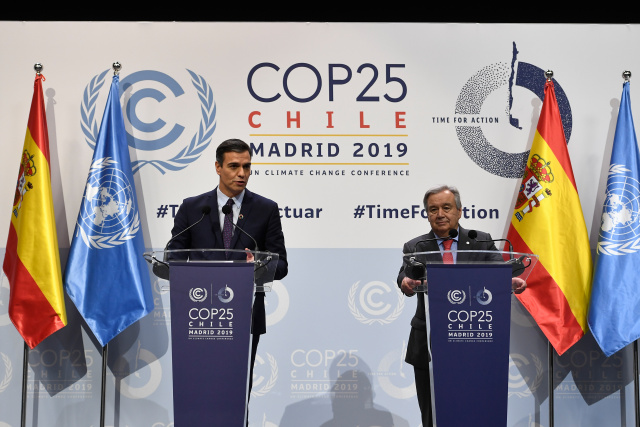 (AFP) - Confronted with a climate crisis threatening civilisation itself, humanity must choose between hope and surrender, UN chief Antonio Guterres told the opening plenary of a UN climate conference Monday.

"One is the path of surrender, where we have sleep-walked past the point of no return, jeopardising the health and safety of everyone on this planet," Guterres said.

"Do we really want to be remembered as the generation that buried its head in the sand, that fiddled while the planet burned?"

Some 40 presidents and prime ministers took turns working that theme as the 12-day talks began, with Austrian President Alexander Van der Bellen at one point holding up a plush polar bear.

"All of you, just like me, are so-called decision-makers, and probably have children or grandchildren who you love," he said in a scolding tone. "Think about those children when you take a decision on behalf of your country."

But it was no coincidence, perhaps, that Van der Bellen's position is largely ceremonial, and that few heads of state from the world's major carbon polluters turned up.

Notably absent were the leaders of China, the United States, India, Russia and Japan, which together account for 60 percent of global CO2 emissions.

"What is still lacking is political will -- to put a price on carbon, to stop subsidies on fossil fuels, to stop building coal power plants," said Guterres, who earlier excoriated the efforts of the world's biggest economies to reduce greenhouse gas emissions as "utterly inadequate".

Only the European Union has stepped into the breach, with its new leader aiming for the bloc to reduce emissions to "net zero" by mid-century.

It has long be clear, in any case, that COP25 would not deliver greater climate ambition, with all eyes turned toward next year's meet in Glasgow -- the last before the 2015 Paris Agreement becomes operational.

The Madrid conference did get a boost Monday from US Congressional leader Nancy Pelosi, who came from Washington to ensure the world that the United States was still serious about taming climate change despite President Donald Trump's decision to pull out of the Paris deal.

"We're here to say to all of you, on behalf of the House of Representatives and the Congress of the United States, we're still in, we're still in," Pelosi said to applause at a forum of heads of state from climate-vulnerable nations.

Trump has dismissed global warming as a hoax, and dismantled many of the climate and environmental protection policies set in place by his predecessor Barack Obama.

Last month Trump gave formal notice of the US withdrawal from the 196-nation Paris climate treaty, which calls for capping global warming at well below two degrees Celsius (3.6 degrees Fahrenheit), and 1.5C if possible.

In his impassioned appeal, Guterres cited new findings from the World Meterological Organisation (WMO) confirming that the last five years have been the hottest ever recorded.

Concentration of planet-warming CO2 in the atmosphere has also reached levels not seen in three to five million years.

"The last time there was a comparable concentration," Guterres said, "the temperature was two to three degrees Celsius warmer, and sea levels were 10 to 20 metres (32 to 66 feet) higher than today."

A major UN science report last year reset the Paris accord's threshold for a climate-safe world from 2C to 1.5C, concluding that the global economy must be "carbon neutral" by 2050 to stay under that threshold.

"The best available science, through the Intergovernmental Panel on Climate Change (IPCC), tells us today that going beyond that (1.5C) would lead us to catastrophic disaster," Guterres said.

President Hilda Heine of the Marshall Islands warned that going beyond the 1.5C barrier would spell the end of her water-bound homeland.

"The most vulnerable atoll nations like my country already face death row due to rising seas and devastating storm surges," she said via a remote video link-up.

Governments that fail to come forward with strong carbon-cutting commitments over the next year are effectively "passing sentence on our future, forcing our country to die."

The Madrid talks are focused on finalising rules for global carbon markets, and setting up a fund to help countries already reeling from heatwaves, droughts, floods and storms made worse by rising seas blamed on climate change.

But outside the conference hall in Madrid, this narrow agenda is provoking a rising tide of anger and anxiety.

A climate action group steeped in civil disobedience plans to descend on the Spanish capital.

"Extinction Rebellion calls on Rebels Without Borders to come to Madrid," the group said in a tweet, using the hashtag #UltimatumCOP25.

"Extinction Rebellion reminds leaders they cannot flee the climate and ecological emergency," the group said separately in a press release.