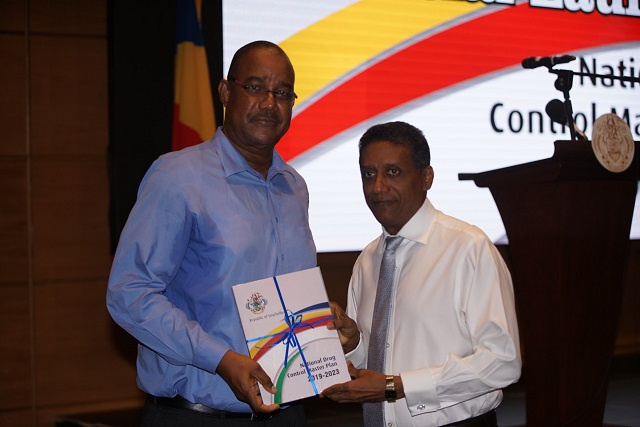 Herminie presenting a copy of the plan to President Faure. (State House/Facebook)

(Seychelles News Agency) - Tackling the drug problem in Seychelles is a top priority of the government, which views the country's methadone programme as a cost-effective method to deal with the threat, top officials said on Monday.

The master plan is an operational planning tool that provides a framework for comprehensive national drug control in Seychelles, an archipelago in the western Indian Ocean.

The plan incorporates new approaches in line with the international drug control conventions and national legislation. The overall aim is to improve the wellbeing and safety of the individuals and the population at large.

Faure said that tackling this issue is the government's top priority.

"The most important thing we can do is reduce the demand for drugs. The only way to reduce demand is if we are providing treatment and thinking about this as a public health problem and not just a criminal problem. Ours should be a simple mantra - no to drugs and a bigger no to drug dealers and traffickers," said Faure.

The President also announced that in line with plans to rehabilitate addicts, a modern rehabilitation centre initially to be built at Cap Ternay will now be built at Bon Espoir, Montagne Posee. The centre will be financed by the United Arab Emirates government at a cost of $3.6 million.

The five-year plan was prepared by the Agency for Prevention of Drug Abuse and Rehabilitation (APDAR), its partners and the United Nations Office on Drugs and Crime (UNODC).

The secretary of state for Prevention of Drug Abuse and Rehabilitation, Patrick Herminie, said that the methadone programme remains within the master plan as statistics show that it costs the country less to have such a programme as opposed to having the addicts end up in prison.

Another element in the plan is that the right of drug addicts will be better protected.

"We do not believe that it is fair for addicts to stand in front of a bus during heavy rainfall, thunder and lightning just to be given some methadone. Why is it that someone who is taking diabetes treatment has the comfort to enter a clinic which is sheltered? This is why we started the clinic at English River and we have the intention to build these in other districts so that these people are treated as human beings," said Herminie.

The Leader of the Opposition in the National Assembly, Wavel Ramkalawan, said there is a need to put politics aside and come together as one to help the youths who are the future of the country.

The National Assembly's Leader of Government Business, Charles De Comarmond, commended APDAR for the work that it is doing through the methadone programme to eliminate problems associated with drugs.