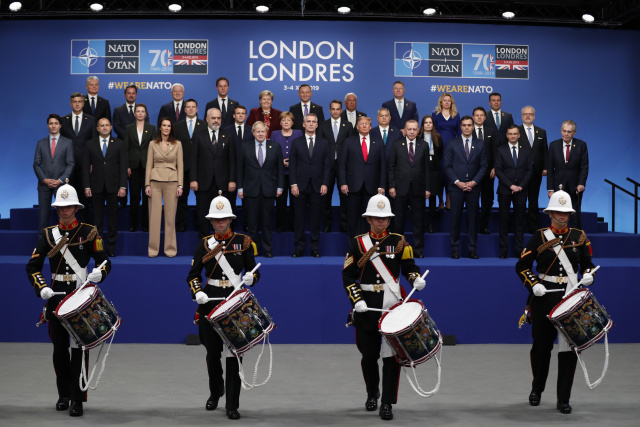 (AFP) - The leaders of the world's most powerful military alliance clashed over personality and policy on Wednesday as NATO's summit ended with an effort to paper over their sharp divisions.

Meeting outside London to mark the 70th year of the Atlantic alliance, the members vowed to stick together against threats from Russia and terrorism and recognised the challenge of a rising China.

But the bad blood continued to the end of the two-day get together, with US President Donald Trump branding Canada's Prime Minister Justin Trudeau "two-faced" after a group of allied leaders were caught on video at a Buckingham Palace reception mocking the US leaders' rambling press appearances.

Trump cancelled his planned final news conference to fly directly back to Washington and into a political storm as opposition Democrat lawmakers issued a report calling for his impeachment.

Despite his anger, he appeared content with the result of the summit, boasting of having convinced his European allies to boost defence spending and Turkey to drop its objections to the adoption of an updated defence plan for the Baltic states and Poland.

The second day of the get together began with the release of a video showing Trudeau, France's President Emmanuel Macron, Britain's Prime Minister Boris Johnson and the Netherlands' Mark Rutte joking together about how Trump had delayed the previous days meetings.

Trump was furious, and criticised the Canadian leader for not meeting NATO members' target of spending two percent of GDP on defence.

The run-up to the summit had been marked by Macron branding the alliance "brain dead" and demanding a new strategy, reopening a dialogue with Russia and refocusing on the fight against Islamist terrorism.

Afterwards Macron stood by his incendiary language, declaring: "I am happy to have launched the debate, it seemed to me indispensable."

Macron rejected Ankara's call, saying that while he was sensitive to Turkish concerns about terror, he would not conflate "different political and military groups".

Despite the rancour, the 29 managed to agree a "London Declaration" and Erdogan withdrew his objections after an unscheduled side meeting with Trump.

"In challenging times, we are stronger as an alliance, and our people safer," the declaration said.

"Our bond and mutual commitment have guaranteed our freedoms, our values, and our security for 70 years."

The statement was the first from NATO to acknowledge the growing strategic challenge posed by China, and also stressed the need for a stronger coordinated response against terrorism.

It held out the possibility of "a constructive relationship with Russia when Russia's actions make that possible" but stressed the threat posed by Moscow's deployment of intermediate range nuclear missiles.

And, in a nod to French and German concerns about NATO's strategic direction, the members asked Secretary General Jens Stoltenberg to consult experts to strengthen the alliance's "political dimension".

In recent weeks Macron tried to shake up the agenda by demanding a review of alliance strategy, but Trump hit back.

"Nobody needs NATO more than France," he warned. "It's a very dangerous statement for them to make."

Macron also turned his fire on Turkey, noting that its forces have attacked the Kurdish militia that backed the allies against the Islamic State in Syria -- and he accused Ankara of working with "ISIS proxies".

Trump has defended Stoltenberg's record of pushing allies for increased defence spending, but he reiterated his own long-standing complaints.

Only nine of NATO's 29 members have reached the target agreed at its 2014 summit to spend two percent of their GDP on defence before 2024.

Trump, who cited in particular Germany as falling short for spending only 1.2 percent of GDP, held lunch talks with the so-called "two percenters".

General » Be a reporter: Write and send your article » Subscribe for news alert
Tags: NATO, summit