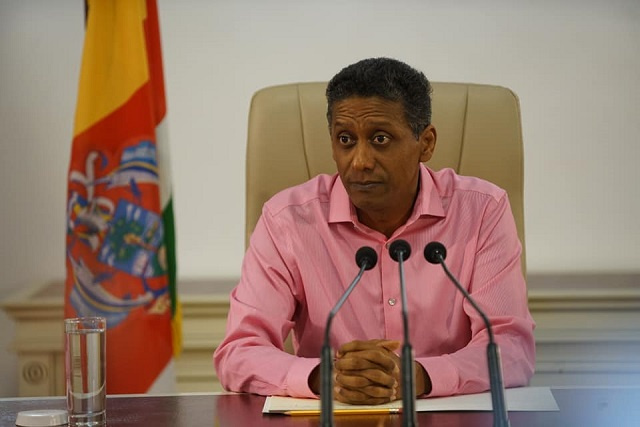 President Faure made his final press conference for 2019 on Thursday at State House. (State House/Facebook)

(Seychelles News Agency) - President Danny Faure of Seychelles said Thursday in his final presidential press conference of 2019 that he will not sign the public salary bill.

Instead, the president said he would proceed with a supplemental allowance, and as of next year raise the pay of an employee making below $440 per month to $454.

Faure admitted that the fund lacks oversight as it is governed by a board of directors which has the power to independently take and make decisions.

"Together, in the last cabinet of ministers meeting we agreed on a policy and we have made an amendment to the Pension Fund Act which has already been gazetted and is now at the National Assembly. We said that the Pension Fund before making any investment above $10 million must have the approval from the ministry.

"Therefore the transaction between the Pension Fund and Cable and Wireless is on hold, whilst the law is passed and approved so that the legal process is done. And that the people of Seychelles especially the members of Pension Fund gets the assurance that their money is being well looked at and that an authority in government gives the final sanction."

"I think it was very irresponsible for the National Assembly to vote against the department's budget. And they did not only vote against a portion of the budget but they voted against the heading, in other words, there is no budget. As a result, staff do not have a salary for January. They took this decision not thinking of DICT's role.

"The department should get a formal apology and at an appropriate time as President I will resolve this problem."

"I have been made aware by the chair of the tribunal that as they have started the work they realized that the tribunal needs a proper legal structure. Our position is that we are examining the case and if we see that this is founded, the government will do the necessary, send the law to National Assembly so that we can attend to these cases."

Earlier this week it was announced that France has added Seychelles to its blacklist of tax havens because the island nation did not provide adequate information about some French offshore entities operating in their jurisdiction.

"When this information came out, we called an urgent meeting with all key personals, so that I could get a report. And the information received is very clear. France sent its demand to the Seychelles Revenue Commission. And at the commission we have a problem with internal capacity and this has been build up and reinforced. But the question that France is asking Seychelles, Seychelles cannot provide this information because the law does not allow us to give out this information. And if Seychelles gives out such information then the law must change.

We have agreed to change these laws but that does not mean we were withholding and hiding information."

Amendment to the bill: 5 percent increase in public sector salary

"This afternoon, I was informed that my office has received the newly amended bill and tonight I want to let all Seychellois know that I will not assent the bill. Instead we are proceeding with the supplementation allowance previously announced which will be backdated to April this year.  And no tax will be deducted from the allowance. And I have also decided this morning that as of January next year, all workers in the government with a basic salary less than $440 will be progressed to $454.

The next presidential election

"In line with the interpretation of the constitution, the election should take place between August 20 and November 20, 2020. All I ask is for respect for the commission."