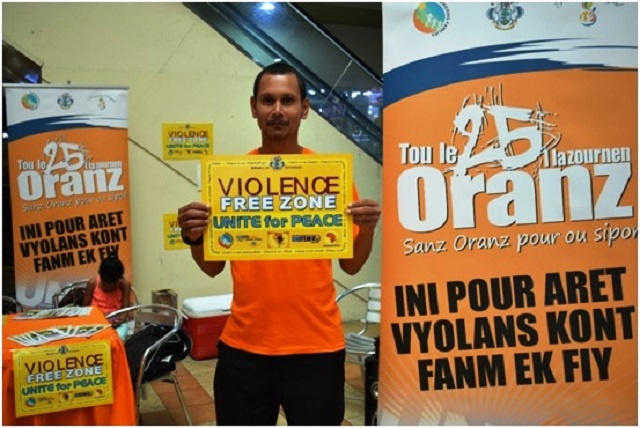 Activists around the world are marking the 16 Days of Activism against Gender-Based Violence from Nov. 25 to Dec. 10. (Seychelles Nation)

(Seychelles News Agency) - Gender-based violence is a serious issue in Seychelles affecting many families and is a matter which is deeply rooted in gender inequality, said a high government official.

Activists around the world are marking the 16 Days of Activism against Gender-Based Violence from Nov. 25 to Dec. 10.

It is a daily reality for the "many women and girls who suffer in silence, behind closed doors, at the hand of those who are supposed to love and protect them. Violence against women and girls continues to increase according to the number of cases reported nationwide," the principal secretary for family affairs, Marie-Josee Bonne, told SNA via email.

For the first three quarters of the year, 356 family violence cases were registered before the respective tribunal, nine more than for the same period in 2018.

Bonne also told SNA that some domestic violence even result in death.

"There have been a few cases where women have lost their lives due to domestic violence - a lady at Anse Boileau whose body was chopped and dumped in Caiman River, a lady who was found dead in her home at Pointe Larue. There is also the incident which occurred on January 1 or 2, where a woman died in hospital as a result of being hit by her partner," said Bonne.

She noted that during 2019 there were several cases where men have lost their lives as a result of domestic violence in Seychelles, an archipelago in the western Indian Ocean.

In the Convention on the Elimination of Discrimination against Women in Geneva from October 21 to November 8, the Seychelles delegation informed the committee of measures being taken to tackle this problem.

A National Domestic Violence Bill has been submitted to the National Assembly. The bill focuses on domestic violence and is not limited only to violence against women and girls but also provides protection to male victims. The Bill is before parliament for consideration in the first quarter of 2020.

"There is ongoing discussion and procedures to build a one-stop centre for women and girl victims of gender-based violence. The proposed amendments to the Children Act, which will ban corporal punishment of girls and boys as well as reasonable chastisements by parents," said Bonne.

In November last year, the only official shelter for women who were victims of gender-based violence opened its doors with the financial support of the European Union.

Bonne and her team have also completed a pilot study on the economic costs of gender-based violence.

Sensitisation campaigns are carried out throughout the year to educate and empower women. This included adverts, television spots and short documentaries on media and talks in workplaces among others.

The Family Tribunal makes provision for the protection from domestic violence in civil cases. As a special court, the Family Tribunal has some advantages over the Courts, as its proceeding are less formal, more flexible, less expensive and resolves disputes speedily.

The Gender Secretariat has received support to undertake research work from local and international organisations.  The Gender-Based Violence National Baseline Study 2016 was done conjointly with South Africa's Genderlinks and the National Bureau of Statistics.

General » Be a reporter: Write and send your article » Subscribe for news alert
Tags: 16 Days of Activism against Gender-Based Violence, Convention on the Elimination of Discrimination against Women, National Domestic Violence Bill