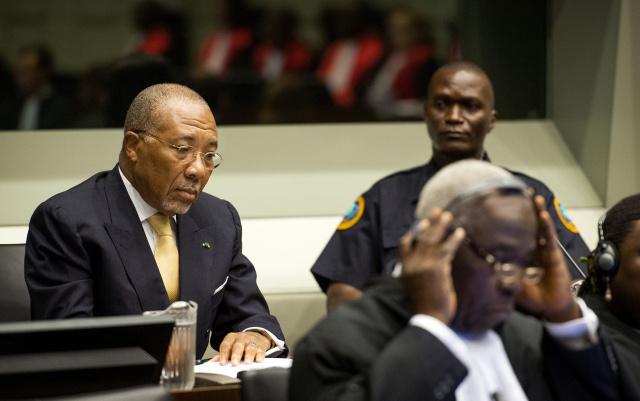 Former Liberia's President Charles Ghankay Taylor (L) waits in the courtroom of the Special Court for Sierra Leone in The Hague prior to the appeal judgement on September 26, 2013. The appeals judges' ruling at the Special Court for Sierra Leone (SCSL) marks the end of the road for the former west African strongman's seven-year long trial. (AFP PHOTO / POOL / KOEN VAN WEEL)

Agnes Taylor, 54, had denied accusations of being involved in the torture of a child and conspiring to use rape to torture women during the conflict in the 1990s.

Prosecutors alleged that all seven offences were committed when she was "a public official or person acting in an official capacity", and were linked to her "official duties".

Taylor, a former lecturer at Coventry University in central England and whose address was given as Dagenham, east London, had been due to go on trial in January next year.

But judge Nigel Sweeney, sitting at the Old Bailey Central Criminal Court in London, threw out the case following legal argument. The prosecution indicated it would not appeal.

The judge did not read out his ruling in open court.

But he said she could not be charged with torture as a crime against humanity or a war crime because the alleged offences took place before relevant legislation was introduced.

Taylor, who left Liberia in 1992 and divorced her husband four years later, followed proceedings via video-link from prison, where she has been held on remand.

Her ex-husband was Liberian president from 1997 to 2003. He is currently serving 50 years in a British jail for his role in fueling civil conflict in neighbouring Sierra Leone.

Taylor was the first former head of state to be jailed by an international court since the Nazi trials at Nuremberg in Germany after World War II.

He was convicted in 2012 on 11 counts of war crimes and crimes against humanity over acts committed by Sierra Leone rebels he aided and abetted during the war.

He was transferred to Britain in 2013.

His ex-wife was accused of acting in a de facto official capacity for the National Patriotic Front of Liberia (NPFL), which the president is said to have set up.

Judge Sweeney said the key issue in the case was whether at the time of the alleged offences, the NPFL was actually in charge of the relevant areas and exercising "official or quasi-official functions or powers which a government or governmental organisation would exercise".

He rejected prosecution assertions that the group, in rounding up, detaining, torturing and killing civilians, was carrying out the functions of a government.