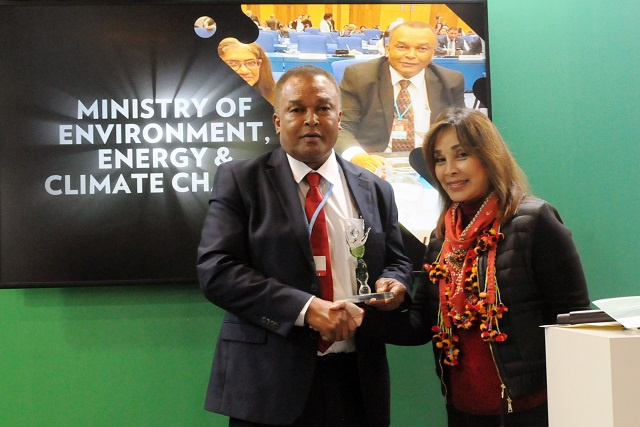 (Seychelles News Agency) - Seychellois Wills Agricole has won one of the first-ever Green Champion awards launched by the Green Climate Fund, the Ministry of Environment, Energy and Climate Change said.

Agricole, who is the Seychelles' principal secretary for Energy and Climate Change, received his Transformational Country Green champion award on Friday in Spain.The principal secretary is part of the island nation's delegation attending the United Nations climate change conference (COP25) from December 2-13 in Madrid.

The award recognises dedication towards effective coordination of climate action from a small island developing state and Agricole said that it "stands as a pillar of my life's work and denotes Seychelles' sustainability credentials fulfilled so far and spotlights the urgent need to find solutions to the climate emergency."

He added that he would like "to be remembered for contributing to climate solutions during a crisis period and in driving climate transformation in Seychelles and the world."

The first Green Champions awards recognise and promote the most noteworthy and successful efforts to combat climate change. Recognition is also given to outstanding individuals and organisations driving climate transformation. Six awards were given overall.

The awards promote initiatives that stand as examples of environmental, social and business-led commitments of climate action. This includes activities limiting or reduce greenhouse gas emissions and encourage adaptation to climate impacts.

The principal secretary said he is committed to pushing for a robust outcome at COP 25 for enhanced and ambitious climate action that is acceptable to all, in light of the climate emergency.

In February, Seychelles, an archipelago in the western Indian Ocean, officially launch it's National Climate Change Policy Framework to meet the country’s climate change challenges. The policy is aimed at providing a blueprint to build climate change resilience in Seychelles in collaboration with regional and global partners