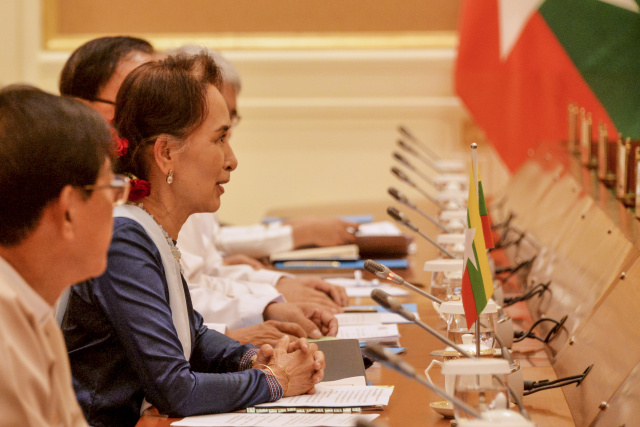 (AFP) - Nobel peace laureate Aung San Suu Kyi is set Tuesday to personally defend Myanmar in The Hague against accusations of genocide, in a remarkable fall from grace for the woman once hailed as a rights icon.

Myanmar's civilian leader will appear at the International Court of Justice as the Buddhist state disputes claims that it tried to exterminate minority Rohingya Muslims in a 2017 military crackdown.

The west African state of Gambia has launched the first bid to bring Myanmar to international justice over the bloodshed, accusing the southeast Asian nation of breaching the 1948 Genocide Convention.

Protests by opponents and supporters are expected outside the UN's top court for the arrival of Suu Kyi, who was once mentioned in the same breath as Nelson Mandela and Mahatma Gandhi.

The 74-year-old's international reputation has been tarnished by her silence over the plight of the Rohingya, and her defence of the same generals who once kept her under house arrest.

The case will also be watched in Bangladesh, where around 740,000 Rohingya were forced to flee into sprawling camps by the bloody campaign in Myanmar's northwestern Rakhine state.

"I demand justice from the world," said Nur Karima, a Rohingya refugee whose brothers and grandparents were killed in a massacre in the village of Tula Toli in August 2017.

"I want to see the convicts go to the gallows. They killed us mercilessly," Saida Khatun, another refugee from Tula Toli, told AFP.

The three-day hearing promises to be a historic one for the ICJ, which was set up in 1946 to adjudicate disputes between UN member states.

Muslim-majority Gambia, acting on behalf of the 57-nation Organisation of Islamic Cooperation, is due to speak on Tuesday, when it will ask the court for emergency measures to stop Myanmar's "ongoing genocidal actions".

"The genocidal acts committed during these operations were intended to destroy the Rohingya as a group, in whole or in part, by the use of mass murder, rape and other forms of sexual violence," Gambia said in its submission to the court.

The move comes ahead of a wider case that could take years.

Suu Kyi's office has said she will "defend the national interests of Myanmar" as she becomes one of the first national leaders to lead their country's defence at the court.

She is due to speak on Wednesday, and is expected to argue that the court has no jurisdiction and that Myanmar was targeting Rohingya militants.

While it risks drawing further criticism abroad, Suu Kyi's decision to go to court has won plaudits in Myanmar, where the Rohingya are widely viewed as illegal immigrants.

Thousands of supporters have rallied for her at home and pro-Suu Kyi billboards have appeared around the country. Fans have even booked tours to The Hague.

- 'Rohingyas have been wronged' -

Potentially working in her favour is the fact that genocide is hard to prove in law, with ICJ judges having only once before ruled that genocide was committed, in the 1995 Srebrenica massacre in Bosnia.

Myanmar, however, faces a number of legal challenges over the fate of the Rohingya, including a probe by the International Criminal Court -- a separate war crimes tribunal in The Hague -- and a lawsuit in Argentina.

Suu Kyi's appearance at the ICJ will be a far cry from her previous visits to Europe.

The daughter of Myanmar independence hero Aung San, Suu Kyi was the face of the opposition to the brutal junta after protests in 1988, earning her the nickname "The Lady", the Nobel in 1991, and plaudits abroad.

After 15 years of house arrest the army finally freed her in 2010, and she led her party to victory in landmark 2015 elections.

But her silence over the Rohingya has led to calls for her to be stripped of her Nobel, while Canada revoked her honorary citizenship.

"The best Suu Kyi can do to restore her image in the eyes of the world is to say the Rohingyas have been wronged," said Abdul Malik Mujahid, an imam who heads the US-based Burmese Task Force.

"Without that her defence will be laughable."