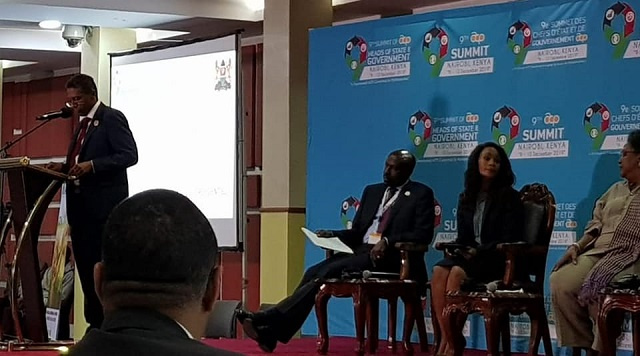 Faure focused his interventions on investment in the Blue Economy in which Seychelles has secured innovating financing. (State House/Facebook)

The presidential dialogue held on Sunday was on the implementation of investment plans and concrete projects to promote industrialisation in the African, Caribbean and Pacific regions.

Faure focused his interventions on investment in the Blue Economy in which Seychelles has secured innovating financing, including the $15 million Blue Bonds proceeds and the $800,000 grant under the African Development Bank Fund for Africa private sector assistance.

The Seychelles’ head of state also answered panel questions on climate change response and preparation and said that “most ACP countries are unprepared for the devastating effects of climate change.”

The President of Seychelles, an archipelago in the western Indian Ocean, is attending the 9th African, Caribbean and Pacific (ACP) summit of heads of state and government which started on Monday and ends on Tuesday.

The theme for the summit is “A Transformed ACP: Committed to Multilateralism.”

Earlier on Monday, Faure was taken on a guided tour of the ACP Village set up in the margins of the Business Summit. The ACP Village showcased the various products, programmes and services available some of the member countries.

In the margins of the summit, Faure held bilateral discussions with Andrew Holness, Prime Minister of Jamaica. Both countries agreed to share a close engagement during the negotiation for a new ACP-EU partnership agreement, with the aim of promoting the unity of the African, Caribbean, Pacific Group of States and collaborating on SIDS issues at the ACP level.

Faure also met with Steven Davis, Deputy Prime Minister of Papua New Guinea and discussed the establishment of diplomatic relations between the two countries which they regretted should have taken place much earlier. In noting the impacts of climate change for Pacific island states, the Deputy Prime Minister welcomed the possibilities for areas of cooperation with Seychelles on tourism and climate change.

Faure will return on December 11.