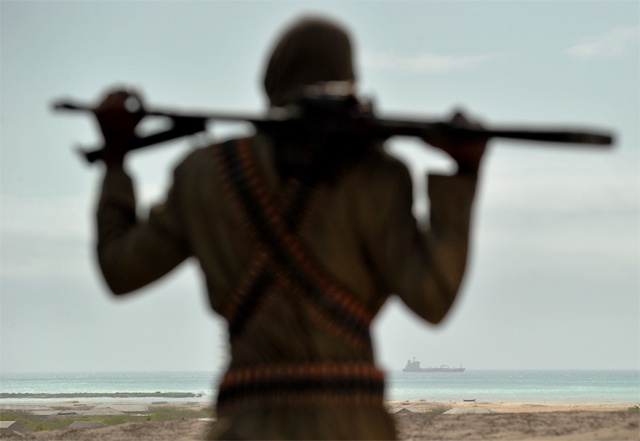 Mohamed Garfanji, Somalia's top pirate boss, stands on sandy dunes just outside the central Somali coastal town of Hobyo as he watches the outline of a hijacked ship anchored off the coast on August 20, 2010. (AFP PHOTO / ROBERTO SCHMIDT)

(Seychelles News Agency) - The Seychelles government has commended the effort of the Somali government following the arrest of one of Somalia’s most notorious pirate chiefs, Mohamed Garfanji.

Garfanji is said to be responsible for multiple ship hijackings and hostage takings including of Seychellois nationals.

In a joint press statement issued this morning the Seychelles Ministry of Home Affairs and Transport and the Ministry of Foreign Affairs said, the arrest is viewed as a positive step towards ensuring the security of the western Indian Ocean region which Seychelles shares with Somalia.

“The arrest of Garfanji is also testament to the concerted efforts of the international community to disrupt the Somali piracy model and end the scourge, which has been plaguing the Indian Ocean since 2005,” read the statement.

Garfanji is allegedly responsible for kidnapping and torturing two Seychellois fishermen as well as hijacking Seychelles flagged ships and the island nation’s government had been actively involved in international efforts to bring him to justice.

In October 2011 Rolly Tambara, aged 70, and Marc Songoire, aged 63, were taken hostage by Somali pirates while they were fishing and remained captive in Somalia for a little over a year before being freed.

“Seychelles had issued an International Arrest Warrant that INTERPOL used as the basis for an INTERPOL Red Alert Notice on the pirate kingpin, Mohamed Garfanji,” read the statement.

Expressing his satisfaction on the latest development the archipelago’s Minister for Home Affairs and Transport, Joel Morgan said “This high profile arrest sends a clear message that there shall be no impunity for those who engage in pirate activity and criminals who profit from the suffering of their victims will be brought to justice and suffer the full consequences of their crimes.”

According to an AFP report Mohamed Garfanji was seized late Sunday in the Somali capital, Mogadishu.

Quoting foreign and Somali security forces, AFP said Garfanji was captured along with several of his well-armed bodyguards.

Afweyne, who was made to believe that he was to take part in a film on piracy, was arrested by Belgian police after he landed at Brussels airport on charges of kidnapping and piracy.

Believed to have been largely responsible for the spread of piracy since 2007 from pirate strongholds such as Haradheere and Hobyo on the coast of Somalia, Afweyne is also believed to have been involved in the kidnapping of another group of Seychellois nationals in March 2009.

Captain Francis Roucou, the skipper of the Indian Ocean Explorer, was hijacked along with six other crew members on their way to the Seychelles main island of Mahé after dropping a party of tourists at Assumption, an island of the Aldabra group some 1,140 km Southwest of Mahé.

The seven men were held captive in Somalia for over two-and-a-half-months.

In spite of piracy remaining a real threat, multilateral naval surveillance and interventions and the presence of heavily-armed guards on cargo ships which began in the past few years, have led to a sharp decline in hijackings off the Somali coast, with only 15 incidents reported in 2013 in comparison to 75 in 2012 and 237 in 2011.

The Indian Ocean island nation of the Seychelles, geographically close to the Somali coast, has placed itself at the forefront of the fight against piracy, working with the United Kingdom and the European Union to apprehend and prosecute suspected pirates in the tiny island nation of 90,000 inhabitants.

The island country prosecuted the largest number of Somali pirates between 2009-2013. To date 124 pirates have been convicted. 23 are awaiting trial.

The awaiting-trial prisoners are taken to the Montagne Posée prison in the lush tropical mountains of the main inhabited island, Mahé, where they are kept separate from the local prisoners, tried at the Supreme Court in the capital city of Victoria and eventually repatriated back to Somalia upon conviction.