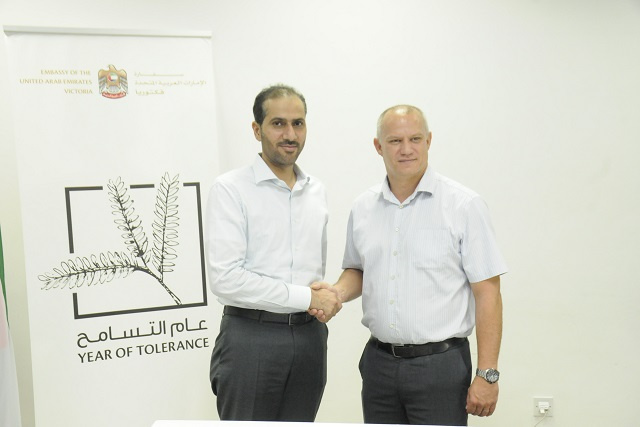 The handing over ceremony took place on Tuesday between the health minister, Jean-Paul Adam, and the chargé d'affaires for UAE, Ahmed Saeed Alneyadi. (Seychelles Nation)

The handing over ceremony took place on Tuesday afternoon between the Seychelles’ health minister, Jean-Paul Adam, and the chargé d'affaires for UAE, Ahmed Saeed Alneyadi, at the Sheikh Khalifa diagnostic centre in Victoria.

The Ministry of Health said the donation adds to the specialist Abu Dhabi Fund -- a special account set up in 2015 under which a number of specialists have been recruited to work in Seychelles.

Adam said the donation will be used to finance the extension of the work being done by medical specialists already in Seychelles as well as to recruit new ones.

He added that there is a need for more specialised care because of increasing incidences of non-communicable diseases. This leads to increased hospitalisation especially among the elderly as well as at the more at-risk population.

“We have established an exemplary primary health care system which is often cited as an example of how a developing country can ensure access and equity for all its citizens towards health care. Our challenge today
is about achieving the highest quality of care that is possible,” said Adam.

As the Ministry has limited human resources, the support of the UAE was critical and the fund will help develop the long-term capacity of the health care sector, the minister added.

For his part, the  chargé d'affaires of UAE said his country “placed strong focus and attention to the health sector as it aims to serve all citizens of Seychelles, providing them with comprehensive world-class health care.”

Alneyadi said that UAE and Seychelles have been working closely with the health sector “towards achieving its national goals, which aims at maintaining the well-being of the people of Seychelles, with services that reflect innovation, sophistication and development, especially for services covering human health and physical, and psychological integrity.”

In his address, Adam also described the project as transformative for Seychelles, an archipelago in the western Indian Ocean, that allows the country to save its limited financial resources.

“Since 2015 we have been able to establish new procedures in Seychelles that have saved money since we did not have to send patients overseas for treatment. We have also increased the level of expertise available in relation to diagnosis and this goes hand in hand with the other support we have received from the UAE which includes the diagnostic facilities, which opened in 2013,” said Adam.

Since the fund was set up in 2015, over 29 specialists have been recruited including specialised care in ear, nose and throat, gynaecology, psychiatry, ophthalmology, orthopaedic, neurology as well as recruitment of specialised physicians and nurses.

The ministry has identified new areas of priority for the next phase. This will include cardiology, vascular surgery, oncology, head and neck surgery, emergency physicians, rheumatology and chest physicians.

The second phase will also include placements and fellowships at UAE based hospitals for Seychellois specialists. In the Seychelles health care there are specialists from other countries such as India, and Morocco with 72 -- the highest number-- from Cuba.

On Tuesday, the UAE chargé d'affaires also handed over a 30-foot fireboat to the chief fire officer of the Seychelles Fire and Rescue Services Agency. This is the first time the local fire services acquire a fireboat in its fire fighting fleet.

The boat which can cater for six seated firefighters is fixed with a modern navigation system specifically equipped to take care of any fire emergencies on ships and ports.