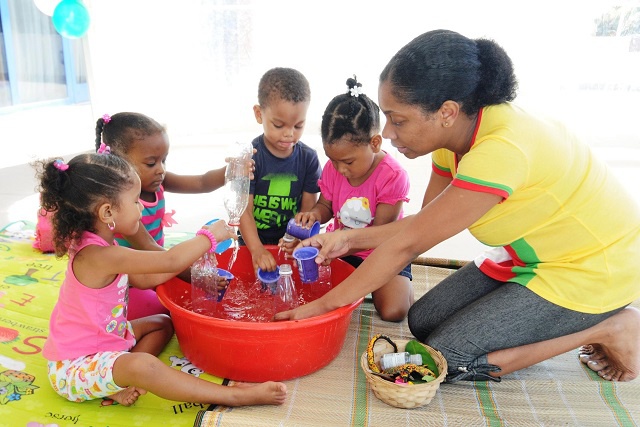 The Institute of early Childhood Development has produced a booklet which highlights some of the Seychellois children's thoughts and feelings about where and how they would like to see Seychelles in 2020 and beyond.(Joena Bonnelame, Seychelles News Agency)

(Seychelles News Agency) - Less than two weeks before the third international conference on small islands begins in Samoa, children in Seychelles have already put forth their aspirations for this small island nation in the Indian Ocean.

‘Seychelles A Determined Island Nation: The Aspirations of Early Childhood Children’ is the title of a booklet published this week which contains the aspirations of Seychellois children ranging from around 3 to 7 years old.

The booklet is a project undertaken by the archipelago’s Institute for Early Childhood development (IECD) which launched a competition in March this year, for all children from crèche to primary 2, from all state and private schools in the country.

The competition titled Early Childhood Islanders Aspiration 2020+: Letter to the President encouraged the children to express their thoughts and feelings about where and how they would like to see Seychelles in 2020 and beyond.

With the help of their parents and teachers crèche children had to express themselves through drawings while primary 1 and primary 2 students also had to add a message to the seychelles President James Michel on their aspiration for the country.

Out of 349 entries received IECD has chosen the best 36 in total that have been compiled into the booklet which contains the handwritten creole version of the children’s work as well as a translation of the texts in English.

IECD is hoping that the Seychelles president will bring copies of the booklet to the third international conference on small island developing States will be held from September 1-4, 2014 in Apia, Samoa.

The launching of the booklet of Early Childhood Islanders Aspiration beyond 2020 was only one of the activities organized to coincide with an open day event at the Institute of Early Childhood Development to commemorate its 15 months of existence.

At the conference which took place in Moscow, Russia in September 2010, Faure pledged his and Seychelles support to implement the Moscow Framework for Action and Cooperation which the delegates adopted under the theme; ‘Harnessing the wealth of Nations.

The Moscow Framework calls upon all member countries to adopt a broad and holistic approach to Early Childhood Care and Education for all children between 0 to 8 years of age.

The Seychelles framework for ECCE was launched in October 2011, following approval by the archipelago’s cabinet of ministers. As part of the various structures established under the national framework, the IECD is its’ regulatory and policy developing arm. It covers all aspects of childhood development from the health and social to the educational, thus bringing cohesion to the national approach to child development.

Speaking at the open day event to showcase its achievement since it became operational, the Chief Executive Officer of IECD, Shirley Choppy noted that the institute has seen significant policy developments and changes in the early childhood sector of Seychelles.

Choppy said while international research has shown that this age group is the stage when children’s development is most neglected, in Seychelles the IECD is focusing a lot on that aspect.

One of the actions implemented is a nationwide study on child minding services from which a framework defining the levels of provision of care has been defined for child minders and their partners.

Choppy announced that the institute is also embarking on a project to develop national standards for child minding services.

“This project is being funded by the World Bank. The IECD is also playing an active coordinating and facilitating role so as to improve the quality of services provided by child-minders,” she added.

Speaking to SNA Choppy said IECD is getting the help of an expert from the World Bank who is experienced in developing standard for early childhood education.

As part of his consultancy the expert is also building the capacity of the IECD team as well representatives from other sectors involved who will work with the consultant on developing the standards.

“After all necessary information is compiled, the World Bank expert will come back to discuss with IECD and other stakeholders and then we will validate the document so that the standards can be implemented,” said Choppy.

She noted that the child-minders and day care operators offering care to young children from 0-3 years will also be involved in the validation process as they will be the ones implementing the standards, which IECD expects shall start mid next year.

According to a national study conducted last year, there are some 147 home based child-minders taking care of 3 or more children aged 0-3 years and at least 20 registered day care centres across the three main populated Seychelles islands of Mahé, Praslin and La Digue.