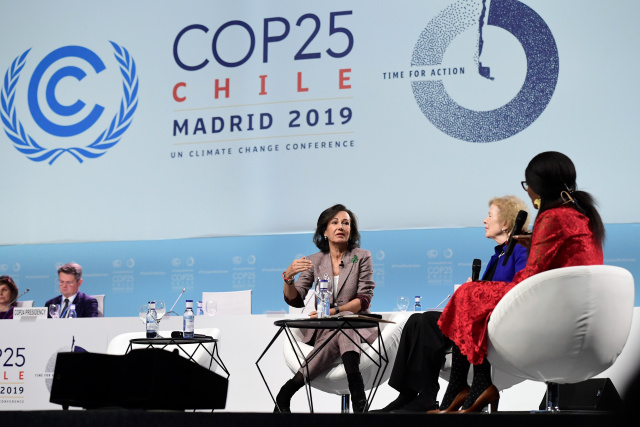 Ana Patricia Botin (C), Executive Chair of Banco Santander and Mary Robinson, Former President of Ireland (2R) take part in a Climate Action dialogue at the UN Climate Change Conference COP25 at the 'IFEMA - Feria de Madrid' exhibition centre, in Madrid, on December 11, 2019. Nations are gathered in Spain's capital to finalise the rulebook of the 2015 landmark Paris climate accord, which aims to limit global temperature rises to "well below" two degrees Celsius and to a safer cap of 1.5C if possible. But the consensus-based talks are bogged down in politically charged wrangling over the architecture of carbon markets, timetables for the review of carbon-cutting pledges, and a new fund to help poor countries already reeling from climate impacts. (CRISTINA QUICLER / AFP)

(AFP) - The EU's top official Wednesday launched the bloc's new "Green Deal", hailing it as a strategy for jobs and economic growth, not just for cutting emissions.

Earlier, she had compared the ambition of the plan to the 1960s US mission to the moon, but Green groups were quick to warn it does not go far enough.

The key element of the plan will be a law committing member states to build a carbon neutral economy by 2050 -- but first it will need the go-ahead from parliament and EU leaders.

"We do not have all the answers yet. Today is the start of a journey. But this is Europe's man on the moon moment," Ursula von der Leyen said.

She promised a "new growth strategy" that "gives back more than it takes away", aiming to mobilise around 100 billion euros to fund clean energy projects.

"We have to make sure no one is left behind," she told reporters. "This transition will either be working for all and be just, or it will not work at all."

In parliament, she said: "Some say the cost of this transition is too high, let us never forget what the cost of non-action would be. It is rising by the year."

The document is the first major political challenge for the former German defence minister since she took charge of the European Commission this month.

And it comes as a UN global climate summit is under way in Madrid -- focusing attention on the crisis -- and on the eve of von der Leyen's first EU summit.

The French government said the Green strategy displayed "a strong ambition on climate and environmental protection".

Various leaked versions of the plan have been flying around Brussels for weeks, and lobby groups from all sides of the debate have been piling on pressure.

The European Parliament was the first to officially receive the plan.

"At this point, we can't yet say if it's a Green Deal or green washing," said French Green MEP Karima Delli as associations feared the proposals did not go far enough.

The leaders of EU member states will hear it on Thursday at their Brussels summit and von der Leyen's deputy Frans Timmermans will take it to this week's COP25 forum in Madrid.

"It's important that, in parallel to the announcement, there's a signal" of support from European leaders, European Council President Charles Michel said.

The key goals are to use a combination of cleaner tech and carbon capture methods to make Europe the first "carbon neutral" economy by 2050.

To convince them, the Commission plans to establish a 100-billion-euro "transition mechanism" to help them transition to renewable energy sources.

"It would help if at the Council we get some progress on carbon neutrality," said MEP Pascal Canfin, chair of the environment committee of the leaders' meeting.

The European Commission wants to set a target of cutting greenhouse gas emissions by 50 or even 55 percent by 2030, up from its 40 percent goal.

But for some this does not go far enough.

"The promises are too small, too few, and too far off," said Jagoda Munic of Friends of the Earth Europe.

"We're on a runaway train to ecological and climate collapse and the EU Commission is gently switching gears instead of slamming on the brakes."

And there are plans for a "border adjustment mechanism" aimed at importers to ensure that EU companies do not lose out to competitors who flout the Paris Climate Agreement.

The Commission will also lay out the timetable for its "from farm to fork" strategy to promote sustainable and quality agriculture, as well as that on biodiversity.

But however ambitious von der Leyen's environmental plan is, it will be very dependent on the money EU members are willing to spend on it.

For the moment, this is the unknown. Negotiations for the multi-year MFF budget for the period 2021-2027 are running late and entering a difficult stage.